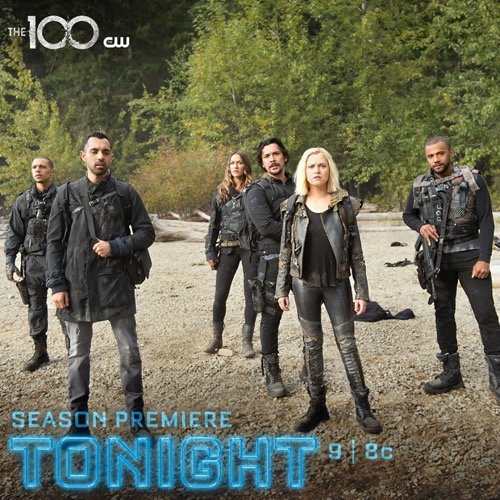 Tonight the CW series The 100 airs with a Tuesday, April 30, 2019 season 6 episode 1 premiere and we have your The 100 recap below. On tonight’s episode called, “Sanctum,” as per the CW synopsis, “The Season 6 premiere: Still reeling after receiving Monty’s message, a small group goes down to explore the mysterious new planet. Back on the Mothership, several members of Wonkru face the consequences of their decisions.”

Clarke and the others watch a video from Monty. He saved them. It is a lot to process but they are all okay. In the mess they seat. Abigail is worried about Kane. They all talk. They plan to land on a place similar to Earth, Planet Alpha. They need to organize their guns. Bellamy tells Raven she is staying behind. She isn’t happy. Abigail says goodbye to Clarke. They head to the planet.

On Planet Alpha, the team finds water and breathable air. Jordan and Raven discover from the ship that the team is actually on a moon. Abigail shows up. She needs blood. Raven offers her blood but she doesn’t want to talk. Abby apologizes for all that she has done but Raven doesn’t want to hear it. While they go back and forth Octavia’s pid is opened.

The team finds water. John jumps in while the others watch in horror. He comes up for air and is fine. They all laugh and smile.

Night falls. The gang make a fire and sit and relax. They talk in small groups about their days in the bunker and the regrets they have about what they had to do to stay alive. They radio to Raven but she isn’t worrying.

Clarke apologizes to Shaw for turning him in. She cannot change that now but they all have a new chance at making better decisions. Jackson yells to them. He caught an insect who has a mind all its own. Suddenly they are swarmed by thousands of angry flying bugs. They figure out that the fire bothers them and uses it to their advantage.

Near a tower, they try to run. Shaw is burned. Clarke risks herself, telling the others radiation won’t affect her. After deterring the swarm who flies in a different direction they all circle around Shaw. They try to help them but he knows he is dying. He tells them to make it count, change.

On the ship, Abby can’t find the pain meds. Raven has taken them. Abby needs them for Mark. Raven doesn’t want to give them up even after Abby says she is clean. She finally gives them to her.

It is daylight. The team doesn’t know what they are going to tell Raven. Miller is worried they just lost their pilot. He gets in a jab at Clarke. Will she see Maddy again? They all start to argue. Stairs come into view up ahead. There is a castle. They take a look around while knocking. John kicks the door in. They find a shrine with blood and more bugs. They decide to leave. They are trying to make a new start.

Marcus comes to. Abby is happy sitting by his side. She catches him up on the last 125 years. He is happy as he looks out the window. Octavia comes in. She starts arguing with them. He is the reason her people are dead. Marcus gets worked up trying to defend himself. He begins coughing on blood. Abby yells for help. He cannot go to the OR. They put him in a pod. He is still alive.

Still, at the castle, they wait to hear from Raven while John sings them all a song with the help of a cassette player he has found. Clarke takes a look around in an open room. Bellamy comes in. He is sorry he couldn’t respond all of those years. Maddy told him Clarke spoke to him every day.

Bellamy brings a book he found to Clarke and Echo. Its a story about how the people of this moon leave when they see the red sun. Its a warning to them. That is why no-one is here. Just then their ship flies away through the sky. Emori tries to attack John. There is something dangerous in the air.