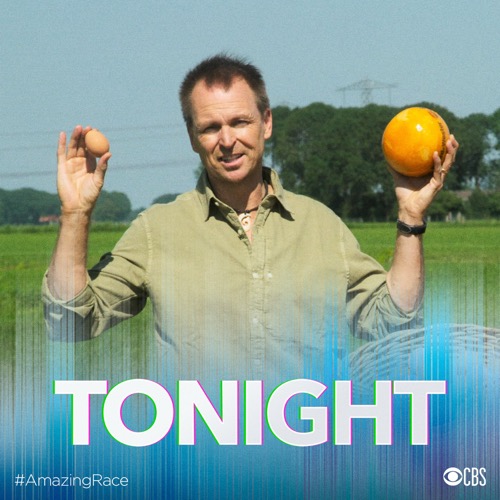 Tyler & Korey were in first place in the last leg and now get to leave first. They are going to fly to Amsterdam in the Netherlands when they arrive travel by train to Kampen. This is the only country in the world that powers their trains with wind power. Once in Kampen, they must find marked tandem bicycles at 9 am; they have $88 dollars for this leg of the race.

Nicole & Victor are the second team to leave; the takeaway from the last leg is to never give up. They are on the first flight with an 8:00 pm arrival with Tyler & Corey.

Teams all arrive at 9 am to get their tandem bicycles and the must drive to Jachthaven; once there, they must search on foot to find their next clue. Nicole can barely reach the peddles, Colin & Christie are having a hard time as well. Its Nicole’s birthday, so she hopes they can do really well.

Next, it’s a Detour where they must choose between “High” where they will hoist a plastic cow up a tower in less than 40 seconds, or “Dry” where they will ride to a farm that dates back to 1432 and pole vault across a ditch, the Dutch way, pick up two kinds of cheese and a dozen eggs. The trick is how do they get back across the ditch with the cheese and eggs.

Nicole & Victor do the pole vaulting and she is terrible at it, she just keeps swallowing water as she repeatedly falls in the ditch. Leo & Jamal, Colin & Christie choose “Dry,” while Nicole is still falling into the ditch. With a lot of help from Victor, he and Nicole are on the way to the market with their eggs and cheese.

Colin & Christie, Tyler & Korey are done, they have to head on their bicycles and drive to a surprise Double U-Turn; this is going to be a game changer.

Becca & Floyd are lost and falling behind, meanwhile, Leo & Jamal are done and they plan on U-Turning Nicole & Victor if they have a chance, its payback time.

Colin & Christie, Tyler & Korey have arrived at the Double U-Turn and decide not to use it. They get their next clue, they have to head to the boat rentals at Smit Giethoorn.

Becca & Floyd finally arrive at the cows and are headed to the tower. Nicole & Victor are at the market, they gave their cheese and their dozen eggs and thankfully there are no cracks, they get their next clue and head to the Double U-Turn, Nicole is praying that nobody U-Turns them. They arrive there and they U-Turn Becca & Floyd.

Colin & Christie arrive at the next clue, they have to navigate through a maze of waterways. Teams must find and pick up two marked boats to create a boat train, then steer it to find the Pit Stop on Bovenwijde Lake. The last time to check in will be eliminated. Leo & Jamal are in second place.

Becca & Floyd find out that they have been U-Turned, they are already far behind. It doesn’t take long for the two to complete it, but there is a cracked egg and they have to return to complete the task again to get another egg. Becca & Floyd are not giving up, they know that Nicole & Victor are behind them and also had to compete the two Detours because they came in last during the previous leg. They arrive back at the market, and this time they do it and get their next clue.

Nicole & Victor are looking for the second Detour and cannot find it, they keep passing right by it. Nicole is so mad that they drove right by the farm. Poor Victor is the only one pulling the cow, they failed on the first attempt. The two are dry heaving and don’t know where they are going to get the energy to do this. They do it on the second try.

Leo & Jamal are not doing well, they cannot find the marked boats.

Colin & Christie arrive at the Pit Stop, they are in first place and have won $7500 each.

Tyler & Korey are in second place, they are thrilled. The rest of the teams are neck and neck, it is going to be a tight run to the finish.

Leo & Jamal are in third place, it is going to be between Nicole & Victor, Becca & Floyd; it is anyone’s fourth place.

Nicole & Victor are team number four; Nicole and Victor are so happy, she considers it her birthday present.

Becca & Floyd are in the last place and have been eliminated from the race. Becca believed it was her destiny to win. Phil said that maybe it was just her destiny to meet Floyd.