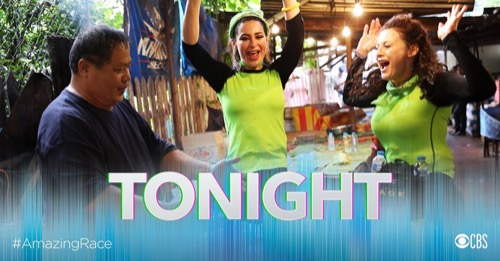 Leo & Jamal are the first teams to depart and after reading their clue, they find out that they are traveling almost 2500 miles to Luang Prabang in Southeast Asia. When they land, they will travel by tuk-tuk to Villa Santi for their next clue that will be delivered before sunrise.

Colin & Christie are next and he is a lot calmer now that they have yoga in their daily routine. Tyler & Korey are next and are grateful for this once in a lifetime opportunity. Rachel & Elissa are having a fun time, they are here for their families.

Leo & Jamal make a stop and book their airline tickets. Corinne & Eliza are not having fun, in fact, if they had a funometer, it would be at zero. They are both convinced that they have learned from the mistakes in the first leg.

Rupert & Laura are in the taxi, it is five o’clock in the morning and Rupert is already sweaty.

Chris & Bret are huge fans of Rupert and want to team up with him and Laura until the end.

All teams are on the same flight, they arrive at the Villa and see the courier, a guy on a bicycle, arrive with their clues. they have to head to “give back to the monks.” Next, the teams have to head to the big tree at the Mekong river and look for their next clue. It’s a Double U-Turn. Rachel & Elissa choose to U-Turn Becca & Floyd because they aren’t friends with them and they tried to work with them in Japan and they didn’t want to work with them. Teams have to choose between ABC and BBQ. In ABC the teams have to learn the local alphabet, then take an oral exam. In BBQ, they have to properly prepare skewers to get their next clue. Becca & Floyd decide to help themselves by U-Turning Tyler & Korey.

Tyler & Korey are at the ABC and are not finding the lesson very easy. At the BBQ, teams first have to shop for their meet, then butcher it and prepare it for the skewers; not such an easy task, the teams have to prepare duck and tilapia.

Tyler & Korey finish their ABC with amazing ease, they only had to redo a few times; they head to the BBQ next.

Corinne & Eliza are the first to finish the ABC and get their next clue, they have to travel by tuk-tuk to Elephant Village.

Leo & Jamal are in 1st place, its a Roadblock at Elephant Village. Using only Lau commands, teams must convince a three-ton elephant to cross the river to find a musical magician.

Jamal used to be a linguist, so picking up a different language is fairly easy for him. Nicole & Victor are second.

All teams are slowly arriving at Elephant Village.

The last team to arrive is Rupert & Laura, and they have been eliminated from the race.