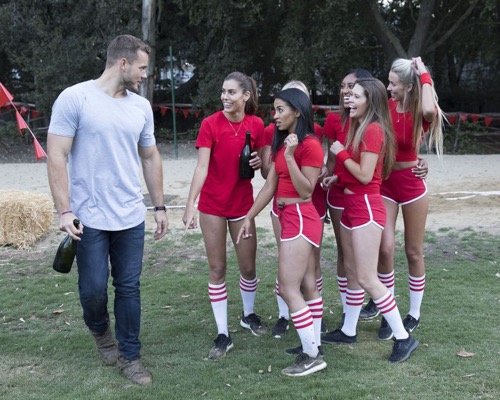 Hannah B. woke up exhausted, she is emotionally drained from her encounter with Caelynn. Chris meets with the girls and Hannah B. tells him about the mean things that Caelynn said about her to Colton. The two agree they don’t want to talk about it anymore, just focus on Colton. Jeff announces there is no date, they will be traveling to as far around the world as they can go, in Singapore and they leave in an hour.

Omyeka is excited, she knows that Colton hasn’t left North America before and she is excited to travel with him.

Colton is ready to kick start this journey. Last week was really tough and he needs to just accept that Hannah B. and Caelynn are just not going to get along.

The women arrive in Singapore, Nicole is dreaming that she will get a one on one date with Colton.

The women love their room, all of them are hoping for the one on one date. Just then, the date card arrives. Tayshia gets the card and it reads, “let’s fall in love, Colton.” Interestingly enough, the look on Caelynn’s face was not nice, she actually looked mad. Meanwhile, Hannah B. looked genuinely happy for Tayshia.

Colton wants to go bungee jumping, Tayshia is not so sure, she is not afraid of heights, but she doesn’t like to fall. In the end, Tayshia gives in to Colton. They go up to the top, and both can’t believe how high off the ground it is 1000 feet. Both are freaking out and Colton decides to remain calm to keep her clam. Colton is first, Tayshia tells him not to die and she will see him at the bottom. Colton does it, but not without screaming. Tayshia is next, she just keeps screaming oh my god. In the end, both do it and seal it with a kiss and then go swimming. The two have good chemistry, whatever they are in store for this evening, Tayshia is down for it.

At dinner, Tayshia tells Colton that she was married before, and now she is divorced. She is Christian, and only thought she would get married once. Colton reveals that he has divorced parents and he can’t judge what makes someone happy.

Back to the other women, the next date card arrives. This group date is for Hannah G., Elyse, Kirpa, Sydney, Heather, Onyeka, Tracy, Nicole, Demi, Courtney, Katie, Kathy, and Hannah B. This means that Caelynn gets a one on one date. Demi tells Caelynn right to her face that it is not fair that she gets to spend more alone time with Colton.

Back to Tayshia and Colton, he tells her that he is happy that she jumped with him and appreciates her opening up to him, then he hands her the rose. Next, the two go on a Ferris wheel.

The next day, Colton is on his group date with the women. Demi hops on Colton and he piggybacks her around the markets. Demi is basically trying to bring herself to the forefront as much as she can. Next, they stop at a leech therapy place, Colton volunteers to be first. Demi gives it a try, then Hannah B.

Back at the apartment, Caelynn is with Tayshia and they talk about Hannah B.

On the date, Hannah B. tries to make conversation with Colton and he is ignoring her. They stop for lunch and the waiter brings bullfrog and pigs feet to try. Colton starts to pay attention to Hannah B. and encourages her to eat a fish eye.

Time for the evening date cocktail. Hannah B. spends some time with Colton, she says that last week was hard and she finds it scary that he may not trust her character. Colton says he feels like during the date, he felt like he got his Hannah back and it was frustrating because he likes her so much. Hannah B. is very happy that they got to talk, she feels so better.

Cassie and Colton also spend time alone, Colton feels so at ease with her.

Demi is alone with Colton, she talks about her mom and how she loves her unconditionally. Colton is really endearing and Demi feels like he generally cares about her.

Courtney is still fuming but still hasn’t made an attempt to spend time with Colton. Demi goes back to Colton and Demi sees her go and is not happy about it. Courtney tells Demi off, calls immature. Demi calls Courtney rude, Courtney walks away.

Time for Colton to give out his rose, he decides to give the rose to Demi.

Once Colton leaves Courtney breaks down, Nicole tries to console her.

Caelynn is ready to go on her date with Colton and says he can’t wait to spoil her. They literally spend the day spoiling her, she tries on dress after dress and Colton loves it. Caelynn comes back and she has so many bags that she can barely hold them. Everyone is trying to be happy for her, but it’s not easy. Cassie is having a hard, she is happy for Caelynn, but it hurts. Caelynn gets dressed and meets Colton for dinner. Caelynn tells Colton that she needs to tell him something, it’s not easy for her, but it is important. Four years ago she was a sophomore in college, her wine was drugged and she found herself naked the next day in her bed. She was sexually assaulted. They took photos of her. She went to a hospital and the police but in the end, the guys who did it got away with it. She says it is a dark part of her history, but important for her to tell him at this stage in their relationship.

Colton tells her that he has already dealt with a girlfriend who was sexually assaulted. Colton has been on the other side, that was his first love and it didn’t happen.

It’s a new day and a cocktail party. Colton comes in a toast the ladies. Colton takes Hannah G. up to his room and they talk, she says she is nervous and the two lie on the bed and cuddle. Sparks fly between the two of them, the roll on the bed, kiss, and hug.

Caelynn pulls Hannah B. aside to talk to her. They talk and hug it out, then leave smiling and laughing.

Demi goes to Colton and tells him that Courtney is cancer in the house, she attacked her, and she doesn’t want him to waste any more time on her. Courtney interrupts them and has her alone time with Colton.

Courtney goes back to the women and confronts Demi. The two get into an argument, Courtney acts innocent and tries to make Demi look like she is the one who is in the wrong.

Time for the Rose Ceremony. The first rose goes to Hannah G., then Heather, Kirpa, Hannah B., Katie, Elyse, Sydney, Cassie, Nicole and Onyeka. Courtney and Tracy are sent home.