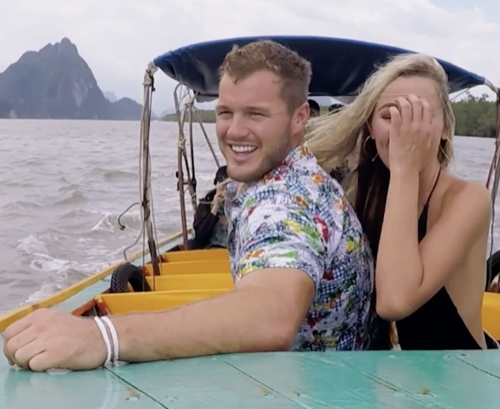 The Bachelor 2019 airs on ABC this evening with an all-new Monday, January 28, 2019, season 23 episode 5 and we have your The Bachelor recap below. On tonight’s The Bachelor season 23 episode 5 as per the ABC synopsis, “Colton’s continuing search for his soulmate moves on to the tropical paradise of Khao Lak, Thailand. Thirteen determined women see this lush destination as a great opportunity to advance their individual love stories with the Bachelor. Heather is the lucky woman to get Colton’s first one-on-one date: a scenic boat ride along Thailand’s coast, which lands them at the “floating city” of Ko Panyi. Elyse’s surprise late-night visit to Colton leads to a game-changing bombshell.”

The girls are thrilled to have arrived in Thailand and it doesn’t take long for the first date card to arrive. Its a one on one date for Heather and it reads, “Heather, let’s experience something new. Colton.”

Colton picks up Heather for her date, they are going on a Thai boat to go exploring for the day. Heather couldn’t be happier and is hoping she gets her first kiss with Colton.

Meanwhile, Elyse is feeling sick to her stomach, she had a great date with Colton and just can’t get over the fact that he is dating other girls. Elyse wants a validation that he is on the same page.

Back on the date, there seems to be a lack of chemistry with Colton and Heather.

A group date card arrives. This one is for Demi, Caelynn, Hannah B. Sydney, Tayshia, Kirpa, Nicole, Onyeka, Hannah G, and Elyse, the card reads, “will our love survive.” Elyse is close to having a breakdown.

At dinner, Colton talks to Heather but one of her past relationships. She says she has dated casually until she met this guy who had everything that she thought she wanted. She was with him for eight months and never kissed him. Now she says that she is ready for it. Colton says that he has a concern, he wants to make sure that they are on the same page. Colton tells her that he knows how serious she is taking this whole process and he offers her the rose. They take a walk on the beach and dance around a little and watch the lights in the distance. Heather is hoping that Colton kisses her but he doesn’t seem to be feeling it. All of a sudden there are fireworks, Colton spins around and kisses Heather – she is so happy. After kissing Heather, Colton is feeling so good and so hopeful, he doesn’t think anything will ruin it.

Heather is back, holding her rose in her hand. She tells the girls about her date and her first kiss with Colton. Elyse gets up and leaves the room, the girls are weirded out. Elyse goes for a walk to Colton’s door. He asks her to come in. Elyse tells him that she has not been herself, she has been struggling a lot. She goes on to say that she wants all the time and attention she deserves to make this relationship work. Colton reassures her that there is a connection, she tells him that it is crushing her. Colton is clearly upset, he is not giving up on a relationship with her and tells her that he is genuinely excited to spend more time with her. She tells him that she cannot accept a proposal from him after sharing him with other women.

Elyse is crying, Colton looks devastated. They both get up, Colton is holding her hand, he hugs her at the door, she is still crying. She tells him that she really wants him to be happy and walks away. Elyse leaves the show and is so pissed off at herself for leaving, but she couldn’t share him.

This was not what Colton was expecting, he can’t believe that Elyse gave up on them, it is his worst nightmare.

The next day, Colton has bags under his eyes, he looks like he was crying all night.

The group date today is in Khao Lak Jungle. Colton welcomes the women to the jungle. They take a walk, this is not a park, this is not a trail, this is a true jungle and Colton wants his future wife to go on adventures with him and get over some fears. They meet a man named Joe, he was raised in the jungle. Hannah B. swallows a big whole and Colton is shocked. Snakes are Colton’s worst fear and Joe has a large one around his neck. Joe gives the women a challenge, split into three times and bring back water and food.

Tayshia moves away from her team and leans into Colton for a long kiss.

The teams are back, Demi’s team went and bought burgers and booze.

Hannah B. gets some alone time with Colton, she is ready to jump off a cliff and give her heart to him. Colton tells her if there was anyone who acted the part today, it was her. She tells him that she was totally in her element. She goes on to say that she is falling in love with him, Colton leans in for a kiss.

Onyeka takes Demi aside to tell her something that Elyse told her about Nicole, and she intends on telling Colton.

Onyeka speaks to Colton, tells him that Nicole told Elyse that she is on the show to look for an opportunity to leave Miami. Colton tells her that that is one of his greatest fears, that someone is not there for him.

Colton asks to speak to Nicole. He tells her that he spoke to Onyeka and she shared that she is there to use this as an opportunity to get out of Miami. Nicole says it is not true. Meanwhile, Onyeka is with the other girls, and Tayshia says that is interesting because she was there for that conversation and Nicole did not say that,

Nicole returns from her chat with Colton, she tells Onyeka that she is shocked that she would tell Colton lies. Tayshia takes Nicole aside to try and calm her down.

Colton joins the ladies and he thanks the ladies for being very open. He gives the rose to Hannah B., she feels like she has come a long way. She thinks that this is Colton’s way of saying that he appreciates what she said.

Cassie is really excited, she was waiting for five long weeks for this one on one date with Colton. They start their date off on a boat. Colton feels so easy to be with Cassie, he really feels like he needs a day like this. Colton has a surprise for Cassie, they are going to be on their very own private island.

Back at the house, the girls talk about Cassie and try to guess what they are doing on their date. A lot of women feel like there is a strong connection between Colton and Cassie.

Meanwhile, Cassie and Colton are in the water, swimming and kissing each other. Colton is insanely attracted to Cassie.

It is dinner time, Colton makes a toast to them and says to the start of something very special. Cassie is not a virgin and feels like she should speak to Colton about it. Colton’s reaction is exactly what Cassie was looking for, he is not bothered by it. The two head to bed and cuddle, he tells her that he is crazy about her and gives her the rose. Cassie doesn’t want to go back to reality. Colton’s gut is just telling him to go on with Cassie.

Going into the rose ceremony tonight is a little awkward because there is a lot of tension between Onyeka and Nicole. Tayshia and Colton head down to the beach, she has them do a lantern which is a local tradition. Colton is with Demi, she has trust rings for them, they seal it with a kiss, Colon is thrilled.

Colton finally spends some time with Nicole, she speaks about what Onyeka said. She pours her heart out to him and he tells her that he sees she is very caring. Then Nicole tells him that Onyeka has been bullying her since day one, and she doesn’t feel that he could possibly have a future with her, for how she treats her. Colton is taken aback, he doesn’t like what he is hearing. Colton is concerned, he does not like the word bully.

Next, Colton spends time with Onyeka. He tells her that he spoke to Nicole who said that she bullies and belittles her. Onyeka tries to act shocked. Colton says that he has a lot of questions now. Onyeka fights back, he says that Nicole is not a good person and she hopes that he can see that she is there with genuine intentions.