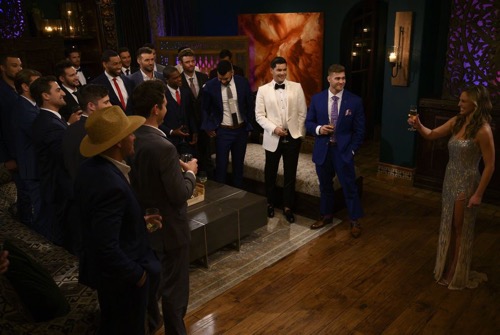 The Bachelorette Season 15 Episode 1 airs on ABC this evening with an all-new Monday, May 13, 2019, season 15 episode 1 and we have your weekly The Bachelorette recap below. On tonight’s season 15 PREMIERE episode 1 as per the ABC synopsis, “Hannah meets 30 hopeful bachelors, while Demi Burnett and Katie Morton gather intel on the men; 22 suitors remain at the end of the night.”

Tonight it is the dramatic season premiere of The Bachelorette. We go back three months ago in Tuscaloosa, AL. when Chris Harrison revealed to Hannah Brown that she was the new Bachelorette. Chris visits Hannah in her home town and takes him for a tour. As a kid, Hannah loved to perform, but she never felt good enough. She felt that she had to be perfect. When she won Miss Alabama she was so happy, but it wasn’t her goal in life. She wanted to find someone to be with for the rest of her life. With Colton, she struggled with being perfect.

It’s really important for Hannah to find a man who will love her for her. She is nervous but expectant. She plans on being herself and finding love. Bring on the men!

Demi Burnett and Katie Morton from the last season of The Bachelor are visiting Hannah in the mansion, they are pumping her up for one of the biggest nights of her life. The two are also keeping an eye on the men to gather intel for Hannah.

Here are a few of the men: Tyler C. is a General Contractor from Florida, he loves to dance. Peter is a Pilot from California, he is very spontaneous and looks forward to sharing that with Hannah. Mike Johnson is a Portfolio Manager from Texas, he has focused on his career and hasn’t dated much. Joe is the Box King from Illinois, he is from a strong Italian family. Matt Donald is a Medical Device Salesman from California, he admits that he has to come out of his comfort zone, he grew up in a deaf household. Connor J. is a District Sales Manager in California, he works for one of the biggest automotive brands in the country – he comes from a very diverse family. Luke P. is an Import/Export Manager from Georgia, he likes to think that he a good looking guy.

Time for the first limo to pull up the drive. Garrett is a Golf Pro from Alabama, he gives Hannah a nice hug. Mike is a Portfolio Manager from Texas, he tells Hannah she smells good and tells her that he lives by the five C’s: character, charm, charisma, consistency, and compassion. Jed is a Singer/Songwriter from Tennessee, he tells Hannah that she is gleaming. Tyler C. is a General Contractor from Florida and he tells Hannah that she is absolutely killing that dress. Dylan is a Tech Entrepreneur from California and he tells her that he really wanted it to be her. Connor S. is an Investment Analyst from Texas and he makes his entrance by jumping a fence. Devin is a Talent Manager from California, he tells Hannah that he is a virgin; they he says he is kidding.

John Paul Jones is from Maryland, he is a little strange and 24years old. Brian is a Math Teacher from Kentucky, he is really nervous. Scott is a Software Sales Executive from Illinois, he tells Hannah that she has an awesome personality. Matteo is a Management Consultant from Georgia, he tells Hannah that she is taking his breath away. Daron is an IT Consultant from Georgia and is very excited to be there. Tyler G. is a Psychology Graduate Student from Florida and Hannah has been in all his dreams. Thomas is an International Pro Basketball Player from Michigan, he has been traveling for the past few years. Matthew is a Car Bid Spotter from California, he is 23 and happy to meet Hannah.

A forklift drives up with a big box that has fragile written on it, Joe, the Box King, is from Illinois and he jumps out of the box. Joey is a Finance Manager from Maryland and he shows up with what looks like a baby in a carrier, he wanted to give Hannah a glimpse of what there future together would be, inside the carrier is a bottle of champagne and two glasses. Connor J. is a Sales Manager from California and arrives speaking French, Hannah has no clue what he is saying. Ryan is a Roller Boy from Pennsylvania and shows up on roller skates. Hunter is a Pro Surfer from California, he is 24 and he brings a tie and makes a joke about tying the knot.

Grant is unemployed from California, he has food in his mouth, mustard and makes a joke about catching up inside the house. Jonathan is a Server from California, shows up with a pizza and asks if she wants a piece of his heart. Kevin is a Behavioral Health Specialist from Illinois, he fumbles his intro with a bunch of footballs. Luke P. is an Import/Export Manager from Georgia, he is 24, climbs up on the limo and pretends to be king of the jungle. Luke S. is a Political Consultant from DC, he tells her that she has a calming presence. Dustin is a Real Estate Broker from Illinois, he can’t wait to have a moment with her. Cam is a Software Sales from Texas, he arrives with a mic and gives Hannah a rap performance.

Hannah met five of the met after the last episode of After The Rose, she gave Cam a first impression rose.

A tractor pulls up, it is Matt Donald, a Medical Device Salesman from California and he sings his rendition of Old MacDonald Had a Farm, decked out in a cowboy hat. Chasen is a pilot from Missouri, he made Hannah a paper airplane. Peter is a Pilot from California and he shows up in his pilot uniform, he gives her a set of wings. As Peter heads into the house, Hannah says a man in uniform is always hot.

Chris tells Hannah that there will still be a First Impression Rose tonight. Hannah enters the house, all the men cheer. Hannah thanks the men for saying yes for going on this journey with her. She says she is not perfect, she is real, and that is what she is asking for her in return.

Luke is the first man that grabs Hannah away for a private chat. He talks about his brother and sister-in-law had their first baby. He says that he is seriously into her.

Connor J. is confident, he throws Hannah B. a private Bachelorette party. He crowns Hannah with a crown, she loved it.

Cam has some alone time, he tells her that he fell for Hannah Beast and she is what he is looking for in a life partner. He asks her if he can kiss her, she says yes.

Chris H. comes in with the First Impression Rose, the guys look nervous, you could hear a pin drop.

Jed sings a song for Hannah and she admits that she has a total crush on him.

Meanwhile, outside the mansion, Demi and Katie are listening in on the house. Earlier in the day, someone reached out to Demi on social media telling her that one of the guys in the house had a girlfriend. Demi finds the guy, his name is Scott.

Peter has some alone time with Hannah and you can really see that Hannah is liking him.

Chris H. calls Hannah outside the house, Demi reveals to her what he knows about Scott. Hannah returns to the house and calls Scott outside, and asks him right out if he has a girlfriend. He denies it. He is clearing his voice, shifting his eyes, stuttering – he is clearly lying. He admits to dating a girl up until he came on the show. Hannah tells him off and throws him out.

Hannah returns to the house, she tells the men that Scott had a girlfriend back home. She says that if anyone else has a girl back home, so please leave. The men don’t budge, Hannah says she needs a second because that was totally ridiculous.

The men don’t know what to do, the mood is awkward. Hannah takes a walk around the grounds. Luke takes the initiative to see if Hannah is ok, he goes to her and hugs her. He says that it hurts how sad she is, and he is here for her, to win her heart. Luke basically gets Hannah out of her mood and she is able to return to the house.

Even though Hannah is still nervous, she is hopeful.

Connor S. leans in for a kiss with Hannah, he loved it.

Hannah comes in to get her First Impression Rose, she gives it to Luke and seals it with a kiss.

Hannah returns to the house, Chris H. comes in and asks Hannah to join him. She takes the time to thank the men for being there.