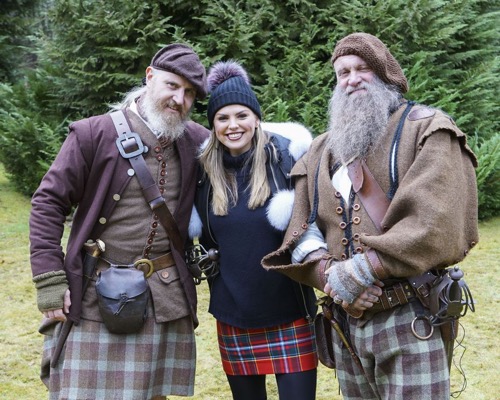 Luke P. and Luke S. have words in private, Jeff walks in, asks them to join the other men and announces that the cocktail party is over, they are going straight to the Rose Ceremony because of what happened between the two Lukes.

Mike thinks it sucks that Luke P. is still there, and if he gets in his way, he will see what happens.

Hannah tells the men that the evening has been confusing and just added to a hard week. But, it is really important that she taps into the strong women that she is and make the decisions that are right for her. Hannah is about to give out the first rose and Luke S. asks to speak to her. They go in private; he says that he is sorry but it has been too difficult to continue to defend his character and just hopes she watches her back when it comes to Luke P. Luke S. leaves the show, the other men are stunned.

Jeff comes in and takes one rose off the table. Hannah returns and tells the men that Luke S. has left and she doesn’t want anyone there that doesn’t want to be there. The first rose goes to Peter, then Connor, Dylan, Dustin, Mike, Kevin, Devon, Grant, and Luke P.

Hannah has crazy chemistry with Luke P., she knows there are red flags, but they honestly haven’t had time to explore their relationship to the fullest.

Luke P. makes a toast, “to finding your forever, and having the time of their lives while on the hunt.” Hannah has an awkward look on their face, the rest of the men have trouble holding in the laughs.

Hannah heads to Scotland with her men, she is hoping that this week will be a fresh start. She tells the men that they should all reset in this new country and have a super fun week. The date starts now, she tells Mike that she wants to explore Scotland and take him with her. Mike is so happy, he says the other guys should be on their toes because he is with Hannah.

Luke P. is alone with the men and they come on the attack for what he did to Luke S., but he doesn’t care, he is just there for Hannah. Jed tells Luke P. to not cross the line anymore.

Mike and Hannah go browsing through shops, she thinks he is funny and very handsome. They head into a sweet shop and they both try some very sour candy; they are so sour you are only supposed to have only two a day – they both conquer it. Next, they go into a whiskey shop and do a taste test. They head to a pub and both try haggis; then find out that it is the intestines of a sheep.

Luke P. is out for a walk, the other men are inside and start talking about him. They find him confusing, and a liar.

Back on the date, Hannah tells Mike that she just wants to focus on their relationship. He tells her that he loves that she can be silly, and he only wants to be around her more and more. The connection is there, Mike is sure it is there to stay. Outside, Mike and Hannah take advantage to have a kiss while standing on a bridge. At dinner, Mike tells Hannah that he really enjoyed his day, it was pretty awesome. Mike is really nervous, he hasn’t been in love in half a decade and really has feelings for Hannah.

The men receive a date card, it is for Devon, Tyler, Jed, Dylan, Grant, Connor, Peter, Kevin and Garret; “love is a battlefield.” Luke P.knows he is getting the one on one and says to the men he is really stoked, after this, he will know if he wants to be there still and hopes he finds clarity. Jed can’t believe what Luke P. is saying, on night one he professes his love to Hannah and now he needs to find clarity!

Mike tells Hannah that he is ready to fall in love and hopes that he will be getting down on one knee soon. Hannah says that he took giant steps to be open to her, allowed her to see what could be and she is excited to continue to grow with him – she gives him a rose.

Time for Hannah’s group date, the men are all excited. Hannah welcomes two very big men, they are battle participants and tell the guys that they are going to participate in one of the most ancient Celtic Highland Games; it’s not just about their strength and physical ability, it is about having heart for them to walk away with Hannah on their arm.

Mike is alone with Luke P. and tells him that he is worried about what he is going to say to Hannah on his one-on-one date. Mike is hoping that Hannah sees the monster inside of Luke P. Mike refers to Mike as a Lukeness monster.

The men put on kilts and find it a little breezy. Its time for the Highland Games, may the best man win. First is the ax throw, they all tried, but some just need to try harder. Tyler did it! Next, they carry mike buckets, all the guys are so amazing, they are having a lot of fun. Jed poured all the milk over himself and Hanah thinks it is hot. Next, it is time for wresting, and the men are not wearing any underwear. Hannah says she got to see all the bagpipes. There can only be one winner, and it is Jed.

It is evening time, Hannah is happy that Luke P. is not there and the evening not being all about him. Hannah is alone with Jed, he won a land deed giving him a square foot, making him Lord Jed and Hannah, Lady Hannah. The two kiss and Hannah gets right on top of Jed, she tells him that she likes being with him. Kevin walks up to the stairs and sees Hannah having Jed pinned down, he heads back downstairs. Hannah next plays pool with Peter and before you know it they are making out on the pool table.

There is a knock at the door, Mike leaves and Luke P. gets his date card, “let’s figure this out, one way or another.”

The day was more than Hamah could have expected, all the guys were so amazing; they really stepped it up and had fun. It made Hannah very hopeful for her future.

Hannah is alone with Tyler C. and she pushes him down on a bed and makes out with him too – she is making the rounds! Time to give out the date rose, Hannah gives it to someone who she says really impresses her, Jed.

The next day, Luke P. tries to make small talk with the men, they have no interest.

Hannah is excited to see Luke P. but there is also a lot of anxiety, there are a lot of red flags and she knows he is disliked by all the other men. Today is either her first one-on-one date with her future husband or it is her last date with Luke P. Right from the beginning, you can sense that there is tension between the two of them. They set up a picnic and sit down to talk. Hannah bring up what all the guys said about him and it really bothers her, she doesn’t understand. Luke P. says he knows he could have handled things a lot better with Luke S., and still maintains that he was not there for the right things. Hannah says it is not the Luke S. thing, there have been other things that he has said and done. He says that anything he says or does the men just try to amplify. Hannah says that one thing she is looking for is a man that people are drawn to and the men are not drawn to him. He says that everyone loves him. She says that sounds boastful and that is one of the issues with the guys. Luke P. just wants to do whatever they planned for the day. Hannah asks him how does he feel, he says he is just being himself even when he was disrespected. Furthermore, he knows how the men are treating him is not right and he is just there for her and wants to give her clarity. Hannah needs a minute, she goes for a walk.

Hannah is really frustrated, she just doesn’t think he understands when she says, “how do you feel?” She returns to Luke P. and he says this is not easy for him and he is going to do everything in his power to make things right. She says she is trying to understand him, but she can’t listen to him continue talking about what happened, she needs more. Hannah asks him to go look at the castle with her, they walk over there. On the walk, she tells him that she just wants to talk about real stuff and he is just talking in ways that he thinks she wants him too. He wants to continue talking, she doesn’t want to and tells him that she needs real. They continue walking, she is really conflicted, and has a hard time letting him go like the other men that were ticking her off. But, she cannot keep making excuses for him, when she doesn’t do that with everyone else. It is late evening, the day was terrible, Luke didn’t open up and just said the same things over and over again. Tonight is very important, he has to step out of his comfort zone and fight for the relationship. She tells him it wasn’t a good day, he thinks it was a good day. She tells him that she wants a man with flaws, not a perfect man. He says he has been conflicted because she hasn’t been the same woman that he first met. Luke P. asks her when she was on his side of this, how did she be the real her. She says that she didn’t handle things well. Luke P. says he is really mad at himself, he is not trying to be perfect, he just wants to be him. She says she wants to know about his relationships, what makes him mad, his relationship with his dad. He says the woman of his dreams was slipping out of fingers, and now he knows that going through all this will make them stronger.

Hannah tells Luke P. that she never felt what she did when she first met him. Today she tried to express what she needed and it was very scary for her. He says that it hurts him because he hasn’t given her the clarity that she was looking for. She says she doesn’t feel good and she doesn’t feel good about him, it wasn’t what she hoped for. She takes the rose in her hand and tells him that she wants to know him more, but honestly, the day was the worst day. All she wanted to see what was underneath, this is not who she pictured the evening to be. She tells him that she can’t give him the rose, he looks shocked., not devasted, just shocked.