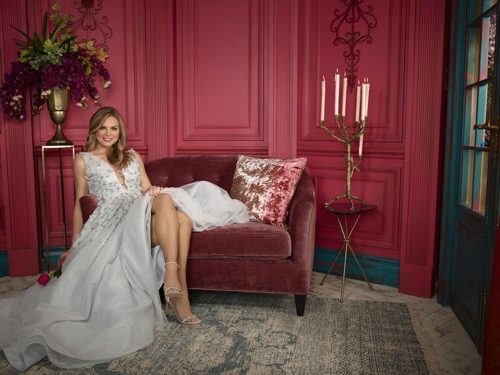 The Bachelorette airs on ABC this evening with an all-new Monday, July 8, 2019, episode and we have your weekly The Bachelorette recap below. On tonight’s season 15 episode 8 as per the ABC synopsis, “Hannah returns to the states to visit the hometowns and meet the families of her final four men: Jed, Luke P., Peter, and Tyler C. Her challenging journey to find love is about to get more difficult as tough questions still need to be answered. ”

This week were hometown visits. Hannah was beginning to fall in love with her final suitors and if she was going to envision a life with any of them then the least she could do was meet their families. It gives her additional insight and it could even help her decide. Hannah first hometown visit was with Peter. Peter hadn’t been someone that immediately caught her attention, but she’s gotten to know him as the weeks flew by and she’s developed feelings for him. Which could be both a good and bad thing. Peter was someone that Hannah used to envision herself with and so she could be choosing him because he’s what she’s supposed to want. And Hannah really needed this trip with Peter because she got to see another side to him.

Peter was relaxed the closer he got to home. He would joke around with Hannah in the car and he has an easy deposition which he showed when he be embarrassed in the car. Hannah had been going through his things looking for gum and she found condoms. She wasn’t offended or anything and so she just said that only kissing was going to happen in his car. It was a light-hearted moment from her and it got a laugh out of him. Peter also showed that he does want to take the next step with her. It wasn’t sex, but it was still an enjoyable experience when he took Hannah flying with him. He got to show off his skills and he told Hannah in his own way that he wants her to become his co-pilot.

Later, Peter introduced her to his parents and his look-alike brother Jack. The family welcomed Hannah into their home and they got to show off some of their traditions like their German prayer for one. The family didn’t take themselves too seriously and they seemed like a loving bunch though there were some concerns behind the scenes. Peter’s family didn’t want him to get hurt in all of this. Peter was the romantic and he’s been hurt before. His previous relationship had left him heartbroken and so his mother was little on guard with Hannah. Hannah was dating four men at the same time and Peter’s mom simply wanted Hannah to treat her son kindly. Peter’s family could see for themselves that he cares for Hannah and so all they really had to say was “don’t hurt him”.

Hannah doesn’t wish to hurt anyone because she wasn’t the type to do needlessly and so really just comes down to knowing what she wants. There was Peter. He was great on paper and he’s shown that he cares for her. Then there Tyler. Tyler has great chemistry with Hannah and he does have his deeper side. He loves his boat which he took out for a ride with her and he showed off his childhood home. Sadly, his family lost the house when the recession hit and he said that his family has become stronger because of the tragedy. Tyler opened up with Hannah and he finally engaged her on an emotional level rather than a purely physical one they’ve been enjoying until now. He even addressed his worries about his dad.

Tyler’s dad has gotten sick and it was Tyler’s biggest worry. He didn’t want to lose his father and he didn’t want his wife as well as his future children to miss out on knowing his dad. Tyler confessed this to Hannah and, as she tried to be there for him, she also couldn’t forget her own concerns. Hannah wasn’t sure that Tyler was ready for a serious relationship. She used her time with his family to sus him out. Hannah asked his brothers if Tyler was ready and they said “yes”. She was also going to ask this question of his father as well and the older man sort of beat her to the punch. He told Hannah that this was the first time he could see his son truly was in love and that he wanted for but the best for Tyler.

Tyler’s dad even tried to be honest with Hannah as much as possible. When he was asked if he believed Tyler was ready to get engaged, the older man replied that his son was twenty-six. Tyler was a bit on the younger side to be thinking about marriage and so maybe that’s what his father was trying to say without saying it. Commitment yes, marriage, on the other hand, required further thought. Tyler’s dad does believe Tyler cares for Hannah and Hannah for her part seems like she cares for him too. It was seeing them together that help put his family at ease. They now feel like Tyler has someone to talk to and be there with as his father’s illness has taken its toll on the whole family. And no one wanted to say that Tyler could be speeding through his relationship with Hannah because he should be getting serious over actually being ready.

Hannah’s next hometown visit was with Luke. Luke has had his own personal demons and he fully confronted them in full view of Hannah. Hannah got to see Luke’s support group and see how he’s open up since finding his faith. Luke had been in a really dark spot and he credits his faith with having saved him. Luke later introduced Hannah to his family and by family he meant everyone. He introduced her to his parents, his brother, his sister-in-law whose name is Hannah, his grandma, and his great-grandma. His great-grandmother was ninety-six and she was enjoying herself at the family gathering. She even got to sit next to Hannah and they enjoyed several conversations before it was time to mention Hannah’s issues with Luke.

Luke has sometimes acted like he has this one in the bag. It frustrated the other contestants and it was off-putting to Hannah because she didn’t think he was arrogant, but she couldn’t identified his behavior any other way. So it didn’t make sense to Hannah. She sometimes has these moments with him that made her believe there was more to the story and so the real problem with him is that Hannah was never sure what was real. Was Luke the gentle soul or was he playing her. Luke has given her pieces of himself that tell different tales and he’s never gave her the whole picture. He was only doing so now because his home turf was apparently where he felt safe enough to do so. Even Luke’s family couldn’t comprehend the man that Hannah was describing from Luke’s worst moments.

They all said that doesn’t like Luke. It sounded like how he used to be before he began working on himself and created a closer bond to god. His family went away their way to defend Luke (often from his own actions) because they knew he wasn’t that person anymore and maybe what they said did convince Hannah. She was with Luke afterwards and he told her that he loves her and she admitted to feeling a flutter in her heart. Now, she didn’t say the flutter was love. It could mean she cares for him and a smaller part of her could be feeling flattered in that moment. Hannah has been getting a lot of “I think I’m falling in love with you” and so the words alone could help her to feel hopeful about where they go from here.

Hannah also felt nice when Jed got around to saying the words as well. He took her to his hometown and he arranged a nice surprise. He took her into a recording booth, and he sang out his feelings for her before he ultimately the words as himself and not as the musician. Jed opened himself up to her and so it was really surprising that his family provided the most resistance to his relationship with Hannah. Hannah has heard before that it couldn’t be easy with dating four guys and usually she was able to overcome some of these hesitations. Jed’s family however put up quite the fight. His father questioned him on his decision to date Hannah and Jed said he was committed. If he hadn’t been then he wouldn’t have given up on job opportunities for her.

Jed’s mother in the meantime was speaking to Hannah and she refused to get over the fact that her son is just one of the many Hannah was dating. Gina even repeated it several times. She didn’t want to forget that part because it played into her argument that Jed should be focusing on his music and not a semi-relationship. Jed’s mom basically said as much to Hannah. Hannah walked away from the whole encounter feeling like she would be getting in the way if she stayed with Jed and that she shouldn’t be wasting his time because that’s what Gina implied. Jed’s sister also said sort of the same thing by mentioning how hard Jed has to work to get noticed and that he wouldn’t have time to himself until long after he’s made his big break.

Hannah thought these women would give her clarity and they instead made her question her relationship with Jed. It wasn’t the only time that Hannah never got the answers she needed and perhaps that’s why she was so lost when it came to handing out the roses. She gave the first rose to Peter and the second rose to Tyler, but she couldn’t decide on who to give the third rose to and she had needed a break from the ceremony to give herself a good cry.

Hannah wasn’t ready to send anyone home just yet and so she asked for another rose.

And when she received the extra rose, she was able to hand one out to Luke and Jed and will be continuing her season with four bachelors.

Hannah thought she made the right choice and all she did was anger Jed because he didn’t want to think it was a toss-up between him and Luke.