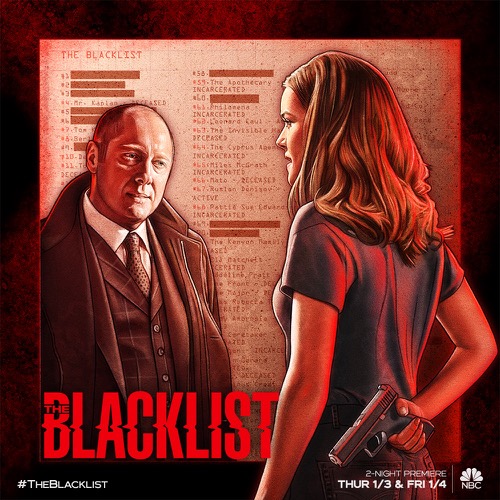 Tonight on NBC their hit drama The Blacklist starring James Spader airs with an all-new Thursday, January 3, 2019, episode and we have your The Blacklist recap below. On tonight’s Blacklist Season 6 episode 1 called, “Dr. Hans Koehler”,  as per the ABC synopsis, “Part 1 of 2. In the Season 6 premiere, Red and the Task Force search for a plastic surgeon who creates new identities for wanted criminals. Meanwhile, Liz and her sister Jennifer secretly investigate the events that took place the night the real Raymond Reddington died.”

A group of masked robbers enters a bank to rob the place. They yell for everyone to get down. One man won’t, it’s Red. He lectures them about their poor execution before pulling out a gun. Dembe backs him. Red brokers a deal with them since he was going to rob the place next Tuesday. They take him up on his offer as long as he can get them out. They all flea with the money. The police follow. Red dumps the robbers out of the back of the truck they are using for a getaway.

Later, Red returns to the bank to give the manager the original Van Gogh’s Poppy Flowers painting. The artwork has repeatedly been stolen and now he wants it to be returned to its original museum. The manager is confused. Red just stole it yesterday. Red admits he only robbed them to see if he still had it. He is turning 60 this year.

Liz talks to her sister about what they plan to do to pull one over on Red now that they know he isn’t their real father, just an imposter. Red calls. Liz meets up with him like nothing is wrong. Red wants her to track down some criminals who have been given a new life to commit more crimes after undergoing reconstructive surgeries by a doctor.

Back at the office, Liz updates the team. They need to find the doctor who is helping these men. Meanwhile, Samar is cleared to go back to work.

The team gets a tip that the doctor was working out of a bakery. They head to the bakery and shut it down to take a look around. They learn that the doctor has also changed his appearance. Red tips Liz off that the doctor may look different too. He also knows that one man, an arms dealer, had his face done and loves to gamble and bet at the track.

Red and Dembe head to the track and find the arms dealer. He tells Red to keep it down he will pay him the money he owes him. Red wants the money and the identity of the doctor.

Liz meets with Jen. She thinks Red is on to them. They need to find the doctor before he does.

Liz and Jen arrive at the location of their own childhood home. They both get out of the car. Memories come back. This is where the fire was. This is where I killed our father, Liz admits.

Liz and Jen talk. Liz did it because her parents were fighting that night, all night. A man arrives. He is a retired sheriff who was there the night of the fire. He tells them that some of the people there that night took off right after. They decide to go to the local hospital to check the records for anyone with injuries from the fire that was treated that night.

Aram calls Liz. He pinged the doctor’s phone. He is in the city. Liz hopes he didn’t tell Red where the doctor was. But he did. She races there. Meanwhile, the doctor’s latest criminal patient shoots him and the staff. Red, Dembe and Liz and her team all arrive at the same time and stop it. The staff is dead but the doctor is still alive barely. Red asks him “where it is?” He replies “Picasso” and then dies. Liz watches them both from a distance. She approaches and asks Red to tell her why he really wanted her to take this case. After some back and forth and dodging.

Ray admits the doctor was his friend and he had suspicions he was being kept against his will. His patient who shot him is one of the deadliest assassins in the world. The team heads back to the office to work the new case, to find the killer. They track him down to Reagan International. They head there. As police flood the place, the man leaves the airport and takes off. Meanwhile, Red shows up at the doctor’s house. He gives his wife his condolences before asking for the Picasso. She shows him in. Picasso is a stuffed dog. Red finds a drive in his collar, its the client list. Red gives the wife $5 million and tells her to leave town quickly. Her husband’s clients will be looking for her.

Red meets Liz on a park bench. He gives her the drive minus one file, his own.