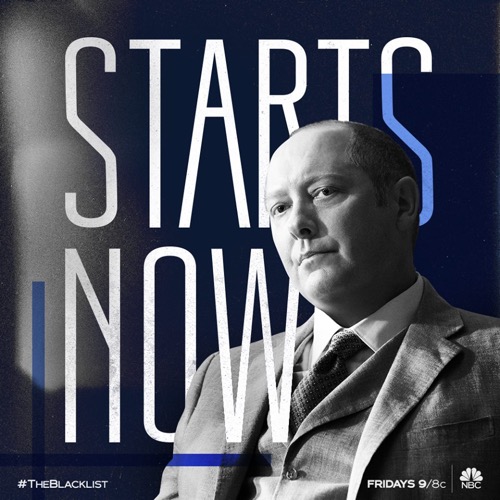 Tonight on NBC their hit drama The Blacklist starring James Spader airs with an all-new Friday, January 11, 2019, episode and we have your The Blacklist recap below. On tonight’s Blacklist Season 6 episode 3 called, “The Pharmacist”,  as per the NBC synopsis, “Liz and the Task Force track a notorious underground biohacker; and Red initiates a strategy to extricate himself from a problematic position. Meanwhile, Cooper’s integrity is tested with a difficult choice.”

We see Dr. Stark, doing a procedure on sick patients, he tells them it is not approved by the FDA and they have to administer it themselves. All of a sudden, the patients start having convulsions and they all die.

Liz goes to see Red in jail and tells him that Cooper spoke to the Attorney General and basically, his immunity agreement never existed. In fact, Cooper has been ordered not to mention the task force to the court. Red doesn’t seem worried, Liz is surprised. Red doesn’t want to talk about him, he tells Liz he saw on the news about these bodies found in an underground warehouse. Red says the person who conducted that experiment is Dr. Stark, a renegade and he fears that he is now the worst kind of Charleton.

In court, Red interrupts his lawyer to try to get bail and the judge tells him there is no way, he is on the FBI’s most wanted list. Red walks up to the judge, and tells her about his immunity agreement, and suggests to her that Harold Cooper can shed some light. Harold goes up to the judge and confirms that there is an agreement. In the judges’ chambers, Cooper tells the judge about the task force. The judge orders Cooper to tell his superiors that she wants a copy of the agreement, they will reconvene in the morning. The judge suggests that Red should tell his lawyer what is going one, but Red decides to represent himself.

The task force is going after Dr. Stark, Ressler doesn’t feel like they have the whole story though. Ressler and Samar are on the scene at the warehouse, The owner of the building found the bodies, there were five of them. On the scene, after examining the bodies, they discovered that three of them had end stages MCDD, they were already dead. Meanwhile, at another location, Dr. Stark has another patient.

Liz goes to see Cooper and asks him if he is really going to give the judge a copy of the agreement, he says he doesn’t have much choice. Liz tells him not to do it, Red is using him.

Aram and Samar go to see a guy who Aram thinks can identify a device that was the scene of the crime that people used to inject themselves. The guy thinks he knows the company that sells it, he gives the info to them. They look at the photo and it’s the owner of the warehouse, he lied to them.

Back in court, the judge has reviewed the agreement. Cooper is on the stand and Red is given the opportunity to ask him questions. Red asks him if he would do it again, his agreement. Cooper says yes, because it saved lives, maybe thousands.

Aram and Samar go back to see the warehouse owner and he finally says it is true, he knew Dr. Stark, but he had nothing to do with those dead bodies. He admits he was diagnosed with MCDD, he was getting worse, Stark’s treatment made him feel better.

The defense questions Cooper and says that Red is irredeemable.

Cooper is with the task force, he updates them about what happened in court and tells them it is all up to Red. In return, the task force updates him about Dr. Stark. The discovered that Dr. Stark is, in fact, a visionary and the medication the five patients injected was sabotaged with a nerve agent. Stark has a partner, Ethan, the task force needs to find him.

Back in court, the defense gives their final remarks that really makes Red look bad. It’s now Red’s turn, and he gives a compelling argument.

Ethan was fired from Big Pharma for stealing. Cooper says something is off, he still feels like they are missing something. Liz found something info on Stark, she knows he is about to do his injections again to more patients, a storage facility in Highland Park.

The task force arrives, but a little late, one patient is dying. Ethan makes a run for it, Resller goes after him.

In court, Cooper arrives for the judge’s verdict. The court finds Red’s immunity agreement legally binding. The defense tells the judge about a defaced gun that Red had when he was arrested, this causes her to announce that there will be another hearing because Red violated his agreement.

Red is back in jail, Cooper is there and Red thanks him for what he did. The hearing has been postponed for two weeks, Red is going to stay in prison. Liz updates him on Dr. Stark, she tells him that he is was right, he was being sabotaged by his partner.

Samar tells Dr. Stark what his partner did. Ethan did what he did for the pharmaceutical company, they didn’t want Dr. Stark to cure MCDD because they make a fortune off the drugs to treat it.

Dembe goes to see Dr. Stark, tells him that Red is concerned because he made a significant investment in his research. Stark says he is making progress and this won’t make any impact.

Red arrives at the prison.