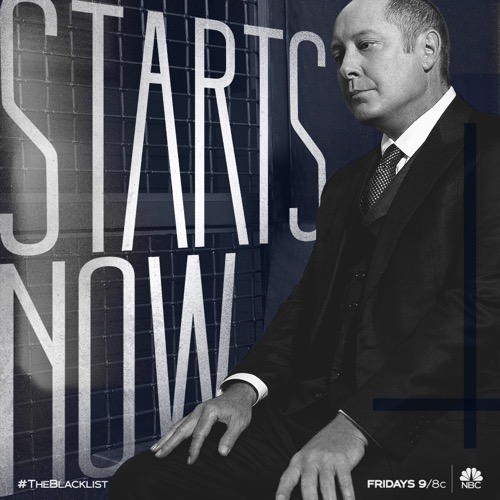 Tonight on NBC their hit drama The Blacklist starring James Spader airs with an all-new Friday, February 1, 2019, episode and we have your The Blacklist recap below. On tonight’s Blacklist Season 6 episode 5 called, “Alter Ego”,  as per the NBC synopsis, “Red argues in court to uphold the validity of his immunity agreement, while Liz and the Task Force question a man whose recent inheritance seems too good to be true and Dembe offers Red some advice.”

A man meets with Dembe who wants to know if Red has his vote, reluctantly he says yes. The same man heads home to find his wife and dinner guests dead at the dinner table. He turns around and three people are in his house wear monkey masks, they force him to drink a liquid that kills him, then turn on the gas in the stove and just as they leave, the poor doggie along with the dinner guests and the man, blow up.

Meanwhile, Red is back in court. He is defending himself. The judges want him to hire an attorney. He tells her he is familiar with the law, his job is to break it. Red calls for a brief recess, he has to meet with the FBI for a time-sensitive case. Back in jail, Liz meets with Red so he can give her the case. billionaire Harris VanNess was killed in a fire because of his association with Red. Red claims it was a targeted hit. VanNess is a group of people who want to cut ties with Red because of his arrest. Samar asks Liz if Red knows who the killer is, Liz says that VanNess had a lot of enemies who wanted his empire. Liz thinks they should first look at the file.

Liz and Ressler head to the reading of the will. Basically, VanNess left most of his fortune to his Timothy, who he says is his son.

Dembe goes to visit Red who tells him that with VanNess dead he won’t have the votes not to get cut off. Dembe tells Red to tell Liz the truth.

The task force is on the case, Timothy has a record and Samar doesn’t think he would have killed his father since he just found out he was his dad. Cooper says that something doesn’t add up and he wants to know why.

Liz and Ressler go to see Timothy, he is having a party outside with his rowdy friends. He tells them that he never had communication with his father, he only found out about him when the lawyer called and invited him to the reading of the will.

Timothy is surprised that his father never met him and is shocked that he left him so much money. Timothy introduces his girlfriend to Liz and Ressler, along with his half-sister and brother-in-law.

Red’s recess is over. The prosecution puts an officer on the stand, he is the one who arrested Red. He claims he noticed a bulge in Red’s jacket, that is when he knew he had a gun. The prosecution shows Red’s gun, the cop recognizes it.

The task force looks into Timothy’s girlfriend, Deidra Moria, she claimed to be a school teacher but that was a lie.

Red cross-examines the cop. Red questions him about the tip who called in. The cop says he didn’t arrest him because of the tip, he did his own investigation. The cop then says Red gave him a fake ID, Red asks him how he could have possibly known it was fake. The cop said Red looked nervous. Red says that he was disrespectful and that is why he arrested him. Red says that he will apologize for being disrespectful if he apologizes for the illegal pat down.

Liz and Ressler are looking for Timothy’s girlfriend, she is at a wedding and the two are looking for her, it turns out, she is the bride. They catch up with the groom at the reception, he tells them she is gone, he hired her to fake marry him to impress his family, because he is gay and to his family it is unacceptable. Liz asks for the name of the company that he called to get this kind of service, he says it is called Alter Ego.

Rosie, 10:28 PM
Samar heads to Alter Ego to find out what they are about. She meets the owner, and he tells her that they rent people out, they are actors. Samar shows him Deidre’s photo and tells him that she wants her real name.

Samar is back, she tells Aram that Alter Ego was very strange but she got copies of all the employee files.

Turns out that Timothy’s sister, brother-in-law, and girlfriend are all actors.

Tim shows up at a hotel room and his girlfriend is getting knocked around.

Samar and Ressler meet with Roger, the owner of Alter Ego. They tell him that he murdered all those people. He says nobody was supposed to die, it was all Marcus. Meanwhile, in the hotel room, Timothy is upset that his girlfriend was hit, Marcus pulls a gun on him. They are all there to set up Timothy, The plan is to kill him and pretend he hit Deidre who is pregnant, then when he is dead, Deidre’s child will inherit all the money. Ressler and Liz arrive just in time. Liz gets into a fight with Deidre in the elevator., Liz wins.

Back in court, the judge listened to the recording and it was fine. Red asks what did the copy have, just a tip that told him a white male in a suit and a hat, in New York City, there are thousands. And, how did the caller know that he had a concealed weapon? The cop knew that what he had was not enough, so he asked for ID, and he gave him a false ID, Red made fun of fun and made a comment.

Liz sits with Timothy while Marcus, Deidre, and his fake sister get arrested. Tim says he feels so stupid. Dembe is there, he wants to speak to Tim. Dembe asks him to do a favor for Red who just saved his life.

Dembe goes to see Red and tells him that his vote got transferred to Tim, who will vote for him.

Back in court, the judge sides with the prosecutor and tells Red he made a good case.

Liz goes to see Red, he says that he was set up, he tells her about the recording and he intends to listen to it, and that is when he is going to know who set him up, and when he finds out who it is, their fate will be sealed.