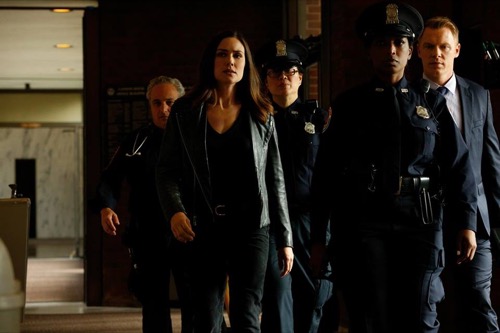 Tonight on NBC their hit drama The Blacklist starring James Spader airs with an all-new Friday, February 15, 2019, episode and we have your The Blacklist recap below. On tonight’s Blacklist Season 6 episode 7 called, “General Shiro”,  as per the NBC synopsis, “Red and Dembe enlist Glenn’s help in stacking the jury to Red’s advantage for his upcoming trial, and the Task Force investigates a series of mysterious deaths resulting from weaponized insects.”

Tonight’s episode starts with a man is in bed, he is choking and calls for his wife, he needs his inhaler. All of a sudden he sees a bug, he goes downstairs, his wife is there and child, there is another bug and this one comes out of his mouth. HIs wife calls 911 and on the operating table, the doctor cuts his neck to see what is going on in there are more bugs come crawling out and start flying around the operating room.

The man who died was a biotech company executive named Bob. Red tries to give Liz the case and she accuses him of using the Task Force for his own benefit. Liz gives in, she brings the case to the Task Force. The executive who died was the third person in this manner, eating alive by killer beetles. Cooper tells Ressler to try and find out what links the victims.

Back in court, the prosecution is objecting the fact that Red wants to ask potential jurors 382 questions. Red says that they are trying to kill him, and trying to dumb down the jurors. The judge tells Red to keep it to 40 questions.

At the morgue, the cause of death is suffocation. We get a glimpse at how the beetles got into his system, someone took larva out of the beetle with a syringe and injected into a glass of wine that the man drank.

Red is in his cell, Dembe is there with him and they are going over the answers that the potential jurors gave. Red tells him that he needs one juror that he can depend on that will convince the other jurors that he is not guilty.

Dembe goes to see a man who has access to the voter logs and they need his help, put a friend on the panel.

Liz and Ressler go to see a friend of Bob who is an anthropologist. The beetle was a genetically modified beetle that preys on humans. Someone made alterations, the jaws of the beetle were four times the size. He thinks someone from the environmental community targeted Bob.

A pesticide named Hexapeen is what linked the victims. One ran the company, one was the attorney and the other the scientist. Ressler found something, Bob had lunch a week ago with Dick Kendal, the clean air guy, in the environmental community he is the guy and he is leading a crusade to ban pesticides.

Ressler and Liz go to see Kendal, Liz hears something weird. So much for finding their killer, Kendal is consumed with beetles.

Back in court, it is time for jury selection.

Aram and Samar head to the restaurant where Kendal and Bob had lunch. The manager tells them there was an incident, a stranger wandered into the kitchen and he was escorted out. The busboy who saw the man, says the guy took off in a taxi. They get surveillance video and see the guy get in the taxi, next is to speak to the cab driver. The driver gives them the address and Task Force head over there, what they find is disturbing, enough larva to kill again, and again, and again.

Red is in his cell and Dembe is there, Red wanted a juror planted, he got himself the guy, Mr. Carter, who has access to the voter logs and is furious that that is all Dembe could come up with.

Back in court, the prosecution asks Carter questions and ends with wanting to get rid of him. Red objects and he wants him. Mr. Carter makes the cut, but then opens his mouth about a conviction and get thrown out.

Dr. Nicholas invented hexane, Cooper orders Samar to get him protection and monitor what he eats and drinks. Ressler says that Kendal’s company was going to issue a press release today that Congress was going to legalize hexaene. The committee on energy and commerce are meeting on it today. Ressler and Liz are heading there. Dr. Nicolas is the primary witness at the meeting. Dr. Nicholas tells the panel that the earth can survive without humans but not without insects. He then tells one of the men on the panel that he poisoned him with the larva, he starts choking and beetle comes out of his mouth.

Red is back in his cell, he is on the phone with Carter and telling him off for opening his mouth. Carter asks what the contingency plan is, Red says it was him and hangs up. Dembe is not discouraged, he still thinks they can get out of here. Red tells Dembe he needs an address that is Nicholas’ lab.

Dembe goes to see Liz and tells her that the jury has been picked, but he needs to get into Nicholas’ lab and he needs her help.

Samar is interrogating Nicholas and he says none of the people who died were his victims, they were his experiments. He starts coughing, he infected himself and the beetles start pouring out of his mouth.

Cooper goes to visit Red, he brings him a cigar to share with him. Meanwhile, Dembe is in Nicholas’ lab looking around. Red tells Cooper a story about how he almost drowned, Dembe saved his life. Dembe got what he needed. Liz asks Dembe if he knows everything, the truth, and he says he does.

In court, the prosecutor has smug look when the jurors come out, he tells Red that he is a dead man walking.