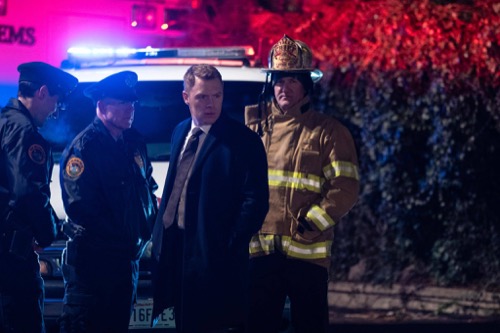 Tonight on NBC their hit drama The Blacklist starring James Spader airs with an all-new Friday, March 29, 2019, episode and we have your The Blacklist recap below. On tonight’s Blacklist Season 6 episode 14 called, “The Osterman Umbrella Company”,  as per the NBC synopsis, “Red directs Liz to investigate a secret organization of assassins hired by global intelligence agencies to eliminate former agents, a case with ramifications that will change the Task Force forever.”

There wasn’t much that Elizabeth knew about her mother. She knew the woman was former KGB and that she was hunted down once she changed allegiances, but Reddington said that she more than just hunted. The KGB had apparently enlisted the Osterman Umbrella Company and they were no joke. They were a third-party assassination team. The OUC took on contracts from the KGB, the CIA, and even the Singapore Intelligence Service. They held no allegiance and could be called upon on to kill any rogue agent from any country. They also weren’t known to the FBI because they mostly stuck to operating on foreign soil and so Reddington was only bringing it up now because he said that their next hit was planned for somewhere in the States. He didn’t know where it was going to happen or who was going to be killed and so he left that part to the FBI.

Elizabeth later debriefed her team. She told them about the OUC and how the company used for farming out hits was now operating in the backyard and so the Deputy Director offered to reach out to a friend within the CIA. He got a hold of a friend and he brought up the company, but he refused to back down even he was warned to and so Cooper eventually got a meeting with someone from the company. He talked with someone who described that there were no outstanding “tokens” in the States and Cooper hadn’t believed him. He thought the other man was lying and so he agreed to Elizabeth’s plan of turning up the heat. They sent Reddington after the one member known to them and Reddington used his own persuasions to get answers. He took the agent to an off-the-books animal farm and released several creatures.

It was perhaps the python that wrapped itself around its victim that got to the man to talk, but Reddington did get an address. He handed it over to the FBI and they sent their agents after it. Elizabeth and Ressler got to the sit and while they didn’t find people they did find the “token”. It was a file on which agent that was targeted and unfortunately both agents knew the potential victim. It was Samar Navabi. She recently became unsure of what her future should be and so she was taking a much-needed break with Aram. Aram got a cabin and they were both going to be unplugged. They didn’t tell anyone where they were going and wanted to remain disconnected from work which was why they didn’t turn on their cell phones. And so two lives were at risk without either of them knowing it.

The team tried to find the couple. They pinged their phones and tried calling all the numbers they had listed, but they weren’t reaching anyone and Reddington figured now was the time to take a risk. He checked up on an old  Mossad contact of his and he demanded to know why Samar was a target. It seems for some unknown reason it was believed that she could turn traitor at any moment and it didn’t make sense. Why did her former allies believe there was something that turns her? There must be something out there and so Reddington went looking for it while the team finally got into contact with Aram. Aram had been lured from the cabin by someone calling to say his credit card was denied and he didn’t think it was odd until he got to the front desk and was told that his card went through just fine.

Aram answered his phone when he began having doubts and that’s when he got the full story from Cooper. Cooper warned him Samar was in danger, but by the time he returned to the cabin, the danger was apparently over. The assassin did come and Samar killed her. She walked away with a scratch on her stomach and she told Aram that they had to go. She realized instantly that Mossad had enlisted the Osterman Umbrella Company to take her out and she knew why. Samar told Aram as they were fleeing that it must be because of her dementia. Her allies were concerned that she would become a liability if her memory continues to fail and so they put out a hit to help prevent. The only thing she couldn’t figure out was how they knew. Samar thought it could have been the doctor or someone on the doctor’s team and that’s when Aram admitted it had been him.

Aram said Samar failed her polygraph during her exit interview. She was being so cagey that it made Mossad concerned that might already be a traitor and so he told them about her condition so that they could understand her dilemma, but they instead used the information against her and now both of their lives were at risk. Samar said she had to disappear and at first she was willing to bring Aram along only they continued to be followed and that alone told Samar that they will always be followed. She didn’t want to risk Aram’s life. She told him that he shouldn’t come with her and they were arguing about it when Aram remembered that he had been given a piece a paper from Levi. Levi hid a tracker in the paper and that’s how the OUC kept finding the pair. They were just getting rid of the tracker when they run off the road and that’s when it truly became a fight for their lives.

They had to shoot their way out of danger and then went running into the woods. Aram still wanted to go with Samar and so she agreed. It didn’t change the fact that it was still too dangerous and so Samar only agreed because she knew it would make things easier on her. Samar later went behind Aram’s back and she fled the country. Samar went her own way and she forced Aram to go his.

No one took the news harder than Reddington who blamed Levi for what happened to the couple and who personally killed the man he felt was responsible.

As for the rest of the team, they had to find a way to be there for a brokenhearted and angry Aram.