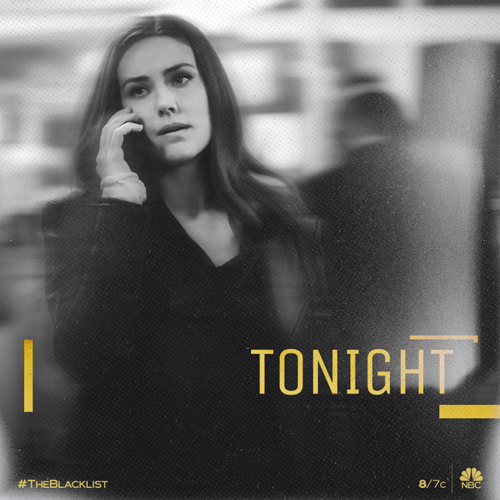 Tonight on NBC their hit drama The Blacklist starring James Spader airs with an all-new Friday, May 10, 2019, episode and we have your The Blacklist recap below. On tonight’s Blacklist Season 6 episode 21 called, “Anna McMahon”,  as per the NBC synopsis, “Presidential adviser Anna McMahon faces off with Cooper and the Task Force in a winner-takes-all race to locate the missing dossier containing details of a conspiracy against America..”

Anna McMahon goes to see President Diaz, he asks her if she got it, she says she is about to. Diaz reminds her that she better, or heads are going to roll.

The task force is looking for the dossier, Cooper thought McMahon had it but Liz tells him that Red revealed to her that McMahon hired a finder to locate it for her. Moreau slipped the drive into a backpack of a passing child, named Arthur Grim. Cooper tells Aram to alert the Grims, if what Red says is true, they have no idea that Moreau slipped a plan for a terrorist attack in their son’s backpack.

Meanwhile, at the Grim house, the father did find the drive and gave it to someone to open. The mother is home with her son Arthur when a man comes to the door and says he is from the Secret Service. He wants the name of the person that her husband gave the drive to.

The Secret Service knock on Sam Whatley’s door, he is the friend who has the drive. Grim shows up at the house and sees the men with Whatley, they beat Whatley but he is not giving up any information.

Meanwhile, the task arrives at the Grim’s house, they are gone. After seeing what was happening to Whatley, Grim returned to his house and left with his wife and son.

Anna McMahon is frustrated they still have not found the dossier, she says she should have killed Red when she had the chance.

Liz goes to see Red when he is getting a message. She tells him that the Grims have the dossier and they need his help. Red goes to see a friend to help him locate the Grims.

McMahon goes to see Cooper and asks him how stupid does he think she is? She asks him what is his interest in the Grim family, he says he will be happy to tell her once she tells him why she is having his agents followed. Cooper tells her that she is involved in a plot against the country, and she knows why they are looking for the Gims because she is looking for them too; they have a flash drive that details her treason. She says she will have his job for this and tells her he is sure she will unless they get to the drive first.

Liz and Red are waiting to hear new about the Grims when she tells Red that she hid her daughter away because she feared who Red was, but now she fears her mother. When Ressler was trying to find out who Red really was, he got a visit from the KGB. Red doesn’t have a chance to respond, his friend arrives with an address of where the Grims may be.

President Diaz is walking with his wife and she tells him that he has something to do, and if he doesn’t do it, she will. Just then, he receives a call from Anna McMahon who tells him what Cooper told her. She wants to change plans, he says no, they proceed as planned.

Ressler and Liz find Grim, his wife, and his daughter. Grim tells them that he gave a copy of the drive to Sam, he opened and found something about German intelligence and a plot against America, by the time he got to see Sam, he saw two people at his house. Cooper calls Liz and tells her to hurry back, McMahon has been following them. All of a sudden the men who said they were Secret Service show up, they try to take Grim and his family. Gunfire goes off, they get Grim, but Ressler and Liz have the wife and child. Liz is left wide open and is almost shot, but Red shows up and shoots the guy and saves Liz. He tells her to get out of there, he is going after the dossier.

One of the men that showed up at the Grim’s house is the President’s body men, they are not a fake Secret Service after all. Meanwhile, Red lost Grim and the drive. Red thinks Sam is dead and they sent a cleaner to take care of it.

Cooper visits the president. and overhears him speaking to Anna McMahon with the help of Aram; Red was right, president Diaz is involved. While the president is on the phone, Cooper slips out.

Earl Wilson is the driver of the mail truck who picked up the package from the mailbox, the Secret Service finds him and his truck; they take him to a warehouse, dump all his mail on the floor and instruct Grim to go through it and find the letter that he wrote to Stacey.

Aram is able to trace one of the Secret Service man’s cell phones which leads them to the location where they have Grim and Wilson. Liz and Ressler arrive and shots are fired, Grim is shot a second time, Liz notices that he has the envelope that they were looking for tucked in his jacket.

Red goes to see Cooper, asks him if he likes the anticipation of finding the dossier.

The task force opens the file and finds out that Diaz was planning a hit on himself. It is going to happen at a debate and the Third Estate is going to be there, who else would Anna McMahon want to blame for killing the president.

McMahon doesn’t want the president knowing the truth, she and her man lie to him about getting the dossier.

Red and Liz start talking about her mother again, he tells her that her mother was not as bad as she thinks she was. He says if she were here, he is sure she would tell Liz that she made so many mistakes; uncertain and unsure. Red tells Liz to bring Agnes home.

Anna McMahon arrives at the task force, arrests Ressler, Aram and Cooper; McMahon tells Cooper she knows that he was plotting to kill the president. McMahon is setting them up, Liz didn’t make herself seen and she manages to escape and not get arrested; she tells Red she just can’t stand there, she is going to do something.