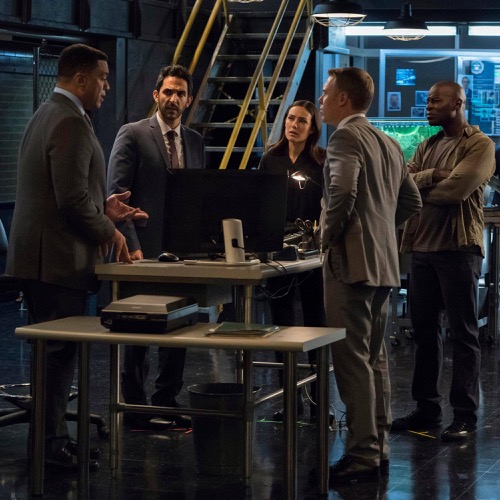 Tonight on NBC their hit drama The Blacklist starring James Spader airs with an all-new Friday, October 25, 2019, episode and we have your The Blacklist recap below. On tonight’s The Blacklist Season 7 episode 4 called, “Kuwait”,  as per the NBC synopsis, “An officer Cooper served with a young man, long presumed to be dead, resurfaces as a POW.”

Liz is with Katarina, she shows her a photo of a person she found for a nanny and then asks her if she has reached out to her daughter yet; she says no. Liz tries to encourage her to do it. Then Liz asks her if she has noticed the man parked across the street day and night; Katarina says yes, she thinks she did. Liz says they are there for protection, from her mother and what she has gone through with her mother, is really bad.

Liz is now at the bureau, Cooper tells her that he made up his mind, he is going to tell main justice who Reddington really is. She then tells him that she found a nanny and needs time off. Cooper then tells her he has already booked the meeting with main justice. Aram comes into the room, he just received something of the supernet, from an unofficial CIA outpost from Zahedan. Aram asks Cooper who is Daniel Hutton, he says a man who died thirty years ago.

In Arlington National Cemetery, Cooper visits Daniel Hutton’s grave. Red is there, he asks him if he is visiting old ghosts, Cooper says that Daniel Hutton is alive; Red says it is not possible. Cooper says he walked out of the mountains of southern Iran yesterday, found his way to a CIA post. Red says that both of them know he is dead. Cooper explains that Hutton claims to have been a POW in the middle east since 1989 and escaped a week ago, asked for him by name. Cooper asks Red if he knew he was alive, he has a flash drive in his hand, and says, while you hold this over my head. Red says he gave him that so he could put the whole incident behind him and he believed that the whole issue of what happened there was resolved. Cooper says he has been holding this secret way too long and has to do something. Red tells him until he looks this man in the eye, they need to take things calmly.

Cooper is in a plane, he is looking back at a video of himself – he was seen having an argument before Hutton vanished. Cooper is seen finding Hutton dropping some crates and there is cash in them and not medical supplies. Cooper tells him to close the crates.

Red is in the plane with him, Cooper tells him that he knows his real name. Red warns him that if tells the powers that be, they will take the task force away from him. Red says they are not finished yet, they are jetting to protect Cooper’s secrets and he won’t protect his. Cooper asks how he knows about Hutton if he is not the real Red; he says he knows because he knows. Dembe is in the plane too. Red tells Cooper that he better hope Hutton doesn’t want to reveal the truth to the world.

Liz is interviewing the nanny, Katarina is listening in from her apartment, she has a picture of the nanny on her phone and smiles when Liz hires her.

In Iran, the plane lands and a man named Farhad comes into the plane, Red welcomes him. The man says his best man is going to drive them. Red tells Cooper that he is not going with him, he has made a lot of enemies over the years in Iran.

Cooper arrives at one of the checkpoints, they bribe the guards to pass. Cooper is there, he is given Hutton’s dog tags and goes in to see him. Cooper calls Hutton by name, who laughs and says he has dreamt about this moment for years. He says he was tortured for a long time. Cooper says it is a miracle he is alive. Hutton says he remembers that day in Kuwait and wonders how he survived it. Hutton apologizes for the last day he saw him.

We go back in time, Hutton and Cooper are driving, shots go off and Hutton is shot.

Present-day, Hutton says he always thought Cooper would come back for him, but when he finally escaped, he knew there was only one person who would help him and get him the rest of the way home. Cooper says he will get him home.

Red gets a call from Cooper, there has been a development, Hutton says the last person who held him in captivity was a man named the Samoon. Red tells him to get out of there, the roads are swarming with the patrol.

Katarina intercepts the new nanny on the street and tells her that Liz’s father is Raymond Reddington, and her mother a KGB agent.

Cooper and Hutton are driving, they are thirty minutes away from the plane. Hutton is really nervous, Cooper gets a call from Red of his ETA – they are entering a checkpoint. All of a sudden, everyone is taking out of the vehicle – Hutton grabs a gun and turns on Cooper, says it looks like Samoon wants to meet him after all.

Red calls the bureau, they want to help, but Red says he is Cooper’s only chance.

Cooper is in a cage, Hutton asks him how easy was it to sell him out. Hutton says they were not ambushed way back when it was Cooper’s Kurdish pals that came for him. He thinks Cooper traded him to fund their war. Cooper tells him to believe what he wants, but it’s not true. Hutton calls him a traitor.

Ressler meets up with a woman named Campbell from the Whitehouse, they go into a basement of a building and bring a briefcase with two hundred thousand dollars in it. They leave, Campbell asks what did they pay for, Ressler says he has no idea, he did what Red told him to do.

Hutton tells Cooper that he held out for years, beating after beating and nobody was coming. Hutton gave the Kurds intel, Cooper tells him it was the wrong thing to do.

Hutton tells Cooper that he is in a cage similar to what he was in and will check back with him in a few decades.

The man who was paid the money has a high tech computer system and is going to help Red remotely. A drone narrows in on the building that Cooper is in and the bomb hits it. Red and his men enter, gunshots go off, they are trying to save Cooper. It doesn’t take long for Cooper to get out, but Hutton has a gun on him, Cooper tells him it is over. Part of the roof collapses and Hutton falls to the ground, a large piece of cement is on him, he begs Cooper to help him and he does. Hutton pulls the gun on Cooper again, Red shoots Hutton and tells Cooper that he is not his burden anymore.

Red and Cooper is in the plane, he tells him it is time to celebrate, close the book and raise a glass. Cooper asks him how he does it, wake up every day and live a lie. Red says it is not a lie, he is exactly who he is, a far more interesting Red than Red was.

Katarina is with Agnes if she likes coloring contests, then sends her to her room to color. Katarina takes time alone to go through Liz’s things.

Cooper is back in the bureau and tells the team about Hutton.

Cooper has the opportunity to reveal Red’s real identity but doesn’t do it. Instead, he gives the memory stick to the bureau.

Katarina has finished going through Liz’s things and goes back to Agnes.

Red and Cooper are at Hutton’s grave, Cooper puts the navy cross on his tombstone; he tells Red that he should have gone back to look for Hutton.

Katarina got a photo, Elias Kozlov, the one person that can tell her what she needs to know.