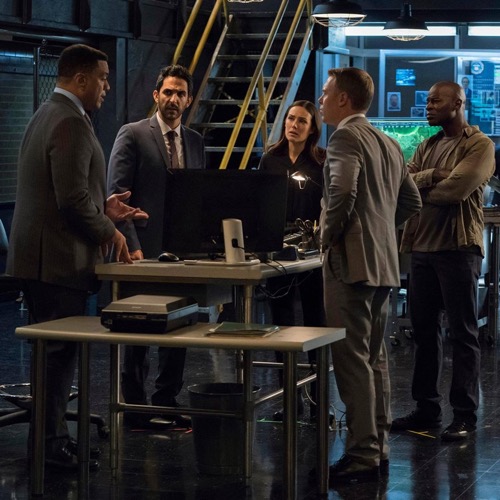 Tonight on NBC their hit drama The Blacklist starring James Spader airs with an all-new Friday, November 8, 2019, episode and we have your The Blacklist recap below. On tonight’s The Blacklist Season 7 episode 6 called, “Dr. Lewis Powell”,  as per the NBC synopsis, “Red alerts the FBI to the suspicious death of a scientist specializing in artificial intelligence research. Meanwhile, Francesca Campbell further entangles herself in Red’s criminal activities.”

Dr. Michael Alexander, a Senior Programmer at DXC labs in Richmond, makes a video while having explosives attached to him and says he seen the worst of humanity, his co-workers are unethical, his management team has asked him to lie repeatedly – his wife sees it and calls him, asks him what is going on, Michael is outside his work and just about to go in when police drive up and tell him to put his hand up. One officer asks him what is in his hand when Michael looks down at his cell phone and doesn’t drop it, the officers start shooting and kill him, while his wife is on the phone with him.

We then see someone in a wheelchair, watching the news and the reporter announces that the bomber was fatally shot by police.

Dembe is talking to Red and says that Francesca almost took his life, but Red responds that she then saved him. Liz arrives and tells Red that Cooper wants to put agent Park on the taskforce. Red says he disagrees and they should take Francesca. Liz responds that she feels Park would be better. They go on to speak about Dr. Alexander, Red says there was no bomb.

Tadashi says he analyzed the video and it is a fake. It’s not just a fake, it’s an ultrarealistic counterfeit made with AI software. Tadashi says he has never seen a fake video this good. Red says that whoever did this wanted the shooting to happen. Dr. Alexander held a high ranking position at one of the foremost defense contractors in the country, giving him access to classified intelligence – he feels his death is a precursor to something far more sinister.

Liz updates the taskforce that Red believes the video was a hoax and Richmond police killed an innocent man. Aram says the video was shared over eight thousand times in the first five minutes, but he was able to trace the first upload to an account named mr_wright362. Just then Park walks in and Cooper introduces her to Ressler, who she has not met yet. Park says she is there because she was able to trace the account that Aram found, she has the address.

Francesca is on the phone with Dembe, she hangs up and a man approaches her and puts a gun to her back just as she is about to get in her car; he tells her to put her hands behind her back and handcuffs her.

Park and Ressler are in the car, he asks her why she chooses Anchorage as her field office, she says she likes the weather. They arrive at the location, find a boy and his mother who look like they know nothing.

Francesca is in a room, the man who abducted her takes off a hood that was over her head. A huge screen on the wall turns on and its Katarina Rostova, who says she betrayed her so she has a job for her and if she doesn’t take it, she will kill her. The man tells her that an associate of Red’s may have set them up in a trap, so they are sending her, she needs to get the man and bring him back to where she is now.

Back to the task force, the kid that Ressler and Park went to see is not involved.

Red is with Francesca and he tells her that trust is so fragile and when it is broken, there is no greater betrayal. Red tells her that she has a new job on the task force, and he judges her as trustworthy. He goes on to say that he needs her to keep on an associate who may be about to betray him.

Aram is with Melanie sneak off for an afternoon in bed together, but it’s a little weird, she gets him to break into a house with her and make out in the homeowner’s bed. Aram is not happy that they broke the law. She tells him that she loves taking risks, she needs it more than ever to keep her alive.

Liz calls Red and tells him that Park has a lead.

Francesca finds the person that Katarina told her to bring to her, it is Vontae Jones and he is furious that Katarina didn’t come herself when he is giving her Red’s head on a silver platter. Francesca says she is just the messenger, he says the deal is off and she pulls a gun on him.

Liz and Park arrive in the apartment with Red, Higgins is dead, it was an accident. Red says he was a hitman and was paid to hit a scientist named Tracy Long.

Ressler and Liz go see Long, tell her that the video by Dr. Alexandre was a fake. Liz asks if she had a meeting that morning, she says yes, with Dr. Lewis Powell, a pioneer in their field – but he didn’t show up, he has ALS and his health is unpredictable.

Park and Aram go to Dr. Powell’s residence, he finds him in a room. There are several tv screens and Aram sees that he is watching Liz and Ressler in one of them. Aram notices that Dr. Powell is not moving, he goes near him, removes the breathing tube. An AI on a computer starts to talk to Aram and tells him that Dr. Powell was taken offline some time ago due to security measures. Meanwhile, Ressler and Liz are dealing with an explosion and trying to help the injured. The AI says his name is Clark, Dr. Powell created him. Clark admits to killing Dr. Powell and he has taken over the systems. He says by removing Dr. Alexander, Dr. Long and Dr. Powell, he set AI back decades, he is destroying their work. Park and Aram start to pull all wires out of the system to stop Clark.

Francesca is offered to set up Red, Katarina offers her a suitcase full of cash. Francesca calls Red and tells him that Vontae Jones has been in contact with Katarina, she tells him where they are and thanks to her, he says he knew he could count on her.

Park can’t believe that the bad guy was a computer. Aram says it was a psycho computer. Park tells Aram and Liz that she is leaving, it is unhealthy for her to work with Red and she wants to tell him in person. Red arrives in the warehouse, the whole thing was set up by Red, it was tested for Francesca. He tells her that he had such high hopes, Park walks in and distracts Red, Francesca grabs his gun and takes him hostage. All of a sudden the gun goes off, Red is shot and Park attacks Francesca and takes her down – there is blood everywhere. Red asks Park why she is there, she says because she couldn’t work for man as brutal as him.

Liz calls Park and tells Red really wants her, the job is hers if she wants it. Francesca wasn’t dead, Red shoots her. Park tells Liz she wants the job, but she needs to know about Anchorage first.