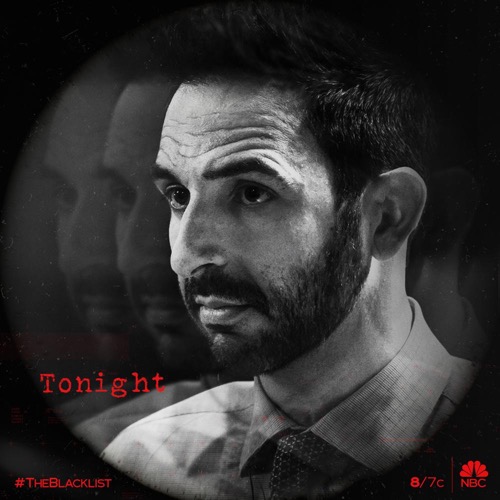 Tonight on NBC their hit drama The Blacklist starring James Spader airs with an all-new Friday, November 15, 2019, episode and we have your The Blacklist recap below. On tonight’s The Blacklist Season 7 episode 7 called, “Hannah Hayes”,  as per the NBC synopsis, “The Task Force investigates the unexplained disappearance and sudden re-emergence of a governor.

Meanwhile, Red and Dembe surveil someone close to Katarina Rostova, as she inadvertently involves Agnes in an operation of her own. Laura Sohn, Brett Cullen and Stacey Roca also guest star.”

Tonight’s The Blacklist opens with a man hanging from his neck, he has a steel pig mask on and he is being held captive by a woman. Then we see another man, Governor Richard Sweeny, he has just woken up and he reads a note by his bed; he is in a storage facility and doesn’t know how he got there. Richard calls an aide to come pick him up.

Katarina is with Agnes, Liz walks in and tells Katarina that she only has to watch her until three. Katarina tells Liz that they are going to the park.

Liz meets Red in a camping park, he is making breakfast, his friend Frank is there. Frank leaves, Red asks Liz what does she think about Governor Sweeny’s reappearance. Liz says she is relieved, the FBI has been looking for him for three years. Red said the person who took Sweeny is planning something bigger.

Sweeny is with his aides, he tells them that after the second procedure they locked him in a recovery room and the only time he saw them is when they fed him. He is advised that the FBI is on their way there and if he wants to keep his career, he should say nothing at all.

Liz and Ressler are at Sweeny’s house, he tells them he remembers nothing.

Sweeny is taking medication, he was left with it in the storage locker – it says, “Daily Medication Regimen” ** FAILURE TO FOLLOW WILL RESULT IN DEATH**. Sweeny doesn’t know what he is taking, but he does. He looks in the mirror, he has a large scar across his abdomen.

Park and Aram are at the storage facility, a man named Simon Peter rented it a year ago and paid cash. They go inside, there are balloons everywhere, and a bed. Aram finds a pill on the floor, Park says she recognizes it, her mom takes them, it’s an estrogen pill.

Ressler and Liz check the restaurant where Sweeny was nabbed, nobody remembers anything but there is a surveillance of a van form Speedy Linens hat left the restaurant just about the same time he was taken. The owner is Wendell Willis, and there is no company called Speedy Linens, so it must have been a fake decal. Cooper tells them to find Willis, he will have a warrant ready.

The man in the pig mask is on his knees, his abductor says that his next victim is coming, James Robson. All of a sudden, the women hears her daughter calling for her and she heads upstairs. Ressler and Liz are at her door and they have a search warrant, they ask if she lives with Wendell Willis, she says he lives out back and she can open his door for them if they want.

Williis just starts a job at Robson Research, he meets Rob Robson. The woman calls Willis and tells him to get out, they can find a new target, the FBI are searching his apartment. Willis wants to continue, he is already in Robson Research. Liz finds a wall of photos behind a painting, they are of Rob Robson – she calls Aram and tells him that she has their next victim.

Katarina leaves Agnes at the park, playing at a picnic table and goes to the restroom. Inside, there are two men and they try to attack her, they loose. Katarina breaks one of the men’s necks and Agnes comes running in and asks what happened to the man. Katarina makes Agnes promise that she won’t tell her mom about the sleeping man.

Red tracked down a man that Katarina paid to cure of a fatal blood disease. He tells Red that he doesn’t know Katarina, his friend Constance paid for it, she is his friend. Red tells him to join him for drive so he can tell him more about Constance.

Liz reports back to Cooper that Aram was too late, Willis was gone with Robson when he went to apprehend him. They have a video of his van, it looks exactly like the one that abducted the governor. The two victims have a lot in common, and there are more, a pastor Jarvis. Ressler goes to see Jarvis who said he was on sabatical, not abducted. Jarvis asks how long ago Robson was taken, Ressler says two ours ago and Jarvis says it is probably too late, they probably did the first procedure. But maybe, they can prevent the second one. Jarvis asks a woman to bring his son Luke in the room. Ressler asks him who the mother is and Jarvis says there is no mother, he gave birth to Luke himself.

Robson is on a surgery table, he is given an anesthetic to fall asleep before surgery.

Ressler goes back to the task force and reports to Cooper and Liz. The victims go through to involuntary procedures. First a uteris is transplanted from a donor and wants the organ takes, they fertilize the embrios and once they hear a heart beat the baby cannot be aborted. Pastor Jarvis believes it’s an object lesson against men who try to take control of woman’s bodies.

Aram and Park are back, they tell everyone about the estrogen pill.

Red is with Patrick getting more information about Constance, he says she was there when her parents were shot and she blamed herself, promised to do anything for him because she blamed herself for his parent’s death.

The men who attached Katarina got Sutherland and are beating him to get information, but he is not telling.

Red calls Katarina, he calls her a fairy godmother. She says that Patrick is not part of this, she tells her that he wants a meeting and if she doesn’t agree, he will put a bullet in his head. She says to tell Patrick she loves him like a son and she is sorry, she is crying, she says she has done her best and she is done with men controlling her life. Red goes to shoot Patrick and Dembe stops him, Red tells the kid to get out.

Ressler arrives at the clinic where the surgery is being performed on Robson. He goes inside with backup and finds that the woman is gone, her name is Hannah Hayes – she made headlines when she was raped and was not permitted to have an abortion, when tried illegally she went to prison and her daughter was born there.

Hannah goes back to her house, she goes downstairs and pulls a gun on the man with the pig mask. Ressler arrives with Aram and tells her to put the gun down. The man behind the mask was the man who raped her. Furthermore, he is the father of all the babies who the men have. Hannah says actions have consequences, she shoots the man who raped her.

Red goes to see Morozov who he asked to find Katarina, he shoots his two friends who are with him and asks him why he didn’t call him when he found her. The man says he doesn’t report to anyone. Morozov shows Red that he has Sutherland, Red shoots Morozov. Dembe cuts Sutherland loose. Red offers him the best medical attention money can buy in exchange for information. He tells Red that Katarina wanted the whereabouts of an old KGB operative, Ilya Kozlov.

Hannah is arrested, her rapist is dead. Willis is arrested. Jobson is taken away by ambulance. Jarvis is rocking his baby. The governor goes to NY to get an abortion.

Cooper tells the task force that they closed this case quickly, and it was partly because of Park. Liz apologizes to Park for not telling her about Red being her father, but the man they are working with is not Red, he is Ilya Kozlov.