BY hellodrdavis on January 11, 2019 | Comments: one comment
Related : Soap Opera, Spoiler, Television, The Bold and the Beautiful 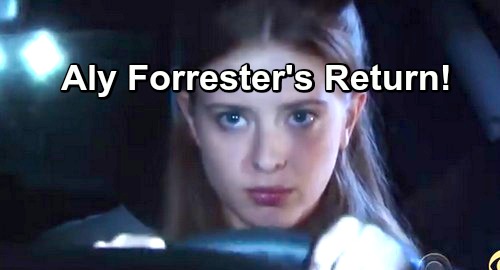 The Bold and the Beautiful (B&B) spoilers has some news to pass on about an ex-B&B actress and fan fave. Ashlyn Pearce, who portrayed Aly Forrester on the CBS soap from 2013-2015, was recently interviewed by Soap Opera Digest, and the topic of a possible Aly Forrester comeback was discussed.

Ashlyn has been busy since she departed the role of Aly Forrester. She’s appeared in various TV series, including Hand of God, Salem, and American Vandal. And she recently made her directorial debut directing a music video for artist Kara Connolly.

But would she ever consider reprising the role of Aly on B&B? It’s an interesting question given that Aly was killed off in 2015, when Steffy Forrester (Jacqueline MacInnes Wood) hit her over the head with a tire iron in self-defense. But since comebacks from the dead aren’t all that uncommon on soaps, it’s always a possibility.

When asked if she’d ever consider reprising the role of Aly, Ashlyn had this to say: “All I’m going to say is that I don’t believe the police on the scene did a very thorough check to make sure that Aly wasn’t still alive. Perhaps they missed that she was still breathing?”

Ashlyn continued: “Actually, I’ve been thinking about that. Between women becoming more empowered and the whole mental illness angle when it comes to Aly, I think there’s a lot that would be pertinent to explore now. It’s kind of sad that she’s not around to be able to connect with fans on that level.”

It certainly sounds like Ashlyn would be up for an Aly reprisal if the opportunity were presented. When asked if she’d ever consider going back to soaps, she said, “I would be very much open to it. There is such a wonderful quality about soap opera, and they have such pertinent storylines. If the right character came along, I would absolutely be open to starting something new with another soap.”

There are certainly plenty of fans who would love to see Ashlyn Pearce to reprise the role of Aly Forrester, or even pop up on another soap. Would you? Stay tuned to the CBS soap and don’t forget to check CDL often for the latest Bold and the Beautiful spoilers, updates, and news.