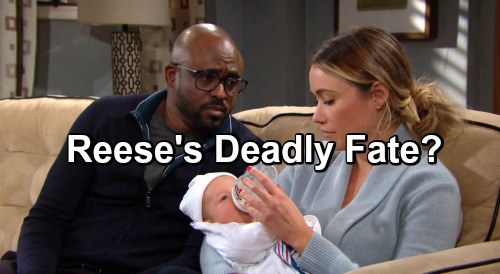 The Bold and the Beautiful (B&B) spoilers tease that at least one B&B character will face a deadly fate this summer. Who will bite the dust and why? The why part’s pretty simple since we’ve got a huge secret that’s simmering. There are plenty of people with a lot to lose, so this death will definitely tie in with Beth Spencer shocker.

Whether this demise is an accident or something more sinister, it’ll likely start with conflict over the truth. As of right now, B&B spoilers hint that Xander Avant (Adain Bradley) seems like the most logical character to kill off. He’s really struggling to keep this secret under wraps, so the guilt may become too much for him. It’s easy to imagine him nearly coming clean just before he faces a grim fate.

B&B could do a murder mystery if they take this route or they could just go with a horrible chain reaction. Thomas might speed after Xander in his car and inadvertently send him off the road. Xander could fall and take a deadly blow to the head during a fight. There are numerous ways for Xander to die.

However, we shouldn’t rule out other possibilities here. The Bold and the Beautiful spoilers say that Xander being the deadly victim hasn’t been confirmed, so why not consider another option? Dr. Reese Buckingham (Wayne Brady) will surely have to get involved in this story again eventually. You can’t reveal the baby swap without the swapper himself.

Reese may eventually decide this secret’s getting out of hand. Since so many people will deal with drama because of it, Reese might have a change of heart and opt to confess. He could convince Flo that they have to own up to their mistakes.

They could resolve to take all the blame, which would be fitting since they are indeed the ones mostly to blame. The others could play dumb, and there’d be no proof against them.

Of course, The Bold and the Beautiful spoilers have been pointing to darker shades of Thomas. If he starts truly winning Hope’s heart, who knows what he might do? This new version of Thomas seems to be capable of anything. Would he kill Reese to stop him from confessing? Would that change the game since the top secret-keeper would be dead and gone?

There’s really no reason to keep Reese alive. Whether he ends up in prison or in a body bag, he’s going down somehow. The Bold and the Beautiful could bring him back only to give him a deadly sendoff. Do you think Reese is going to wind up a murder victim? Does he deserve that fate?

Regardless, big trouble’s brewing and that’s sure to bring some gripping moments. We’ll give you updates as other B&B news comes in. Stay tuned to the CBS soap and don’t forget to check CDL often for the latest Bold and the Beautiful spoilers, updates and news.