The Bold and the Beautiful Spoilers: B&B Moves Forward with ‘Thope’ – Is Thomas and Hope Pairing Sweet or Creepy? 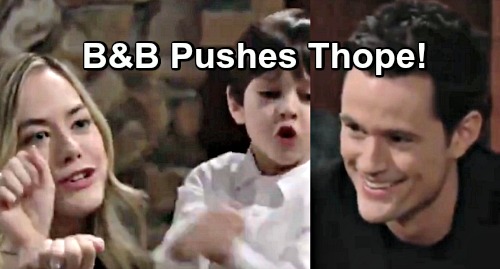 The Bold and the Beautiful (B&B) spoilers tease that Hope Spencer’s (Annika Noelle) bond with Douglas Forrester (Henry Joseph Samiri) will continue to touch Thomas Forrester’s (Matthew Atkinson) heart. It won’t be long until Thomas and Hope’s bond strengthens, too. Hope is married to Liam Spencer (Scott Clifton), but it turns out another romantic hurdle was just eliminated.

Thomas revealed that he couldn’t make it work with Caroline Spencer (Linsey Godfrey), so they were just best friends and co-parents at the time of her death. There’s an obvious reason for that revelation. B&B undoubtedly wants to move Thomas into a new romance a bit quicker. It makes it less tacky for him to jump right in since he wasn’t romantically attached to Caroline.

Of course, Hope is the frontrunner for Thomas’ next relationship. The Bold and the Beautiful spoilers say some trouble will hit next week. Hope will balk when Liam announces a plan for their future. Perhaps Liam will think they could use a lengthy getaway somewhere. With Steffy Forrester (Jacqueline MacInnes Wood) and the girls gone, Liam may not see why they should stick around.

Hope, on the other hand, will surely want to be there for Douglas and even Thomas. When she rejects Liam’s idea, he may grow concerned. The whole point of Steffy leaving was to give “Lope” space and stop Hope’s “Phoebe Forrester” (Isabella de Armas) obsession. Liam won’t approve when he realizes Hope’s stuck on Douglas and is ignoring what they need to fix in their marriage.

The Bold and the Beautiful may keep building on Liam and Hope’s problems until they split or Hope cheats – whichever comes first! Regardless, B&B viewers have some very different opinions on all this. Plenty of fans out there are happy Douglas and Hope have each other during this difficult time. Some of those fans think Hope and Thomas would be a good match due to their recent experiences.

Other B&B viewers find the thought of Thomas and Hope being together a little icky. They obviously aren’t related by blood, but they are stepsiblings. Ridge Forrester (Thorsten Kaye) and Brooke Forrester (Katherine Kelly Lang) have been on-again, off-again for years, so that’s nothing new. Hope and Thomas even share a brother in RJ Forrester (Anthony Turpel), which makes this weird for many fans.

However, Thomas once pursued Ivy Forrester (Ashleigh Brewer), so he apparently likes to keep it in the fam! The Bold and the Beautiful often has pairings where famly connections are too close for comfort, so that’s probably not a big deal to some. Hope and Thomas seem to have chemistry. That might be enough for viewers who just want something fresh.

How do you feel about Thomas and Hope as a pairing? Do you find them sweet or do their family ties bother you? We’ll give you updates as other B&B news comes in. Stay tuned to the CBS soap and don’t forget to check CDL often for the latest Bold and the Beautiful spoilers, updates and news.