The Bold and the Beautiful Spoilers: Bill’s Dark Side Returns to Take on Thomas – Liam and Wyatt Burned, ‘Dollar Bill’ Strikes Back? 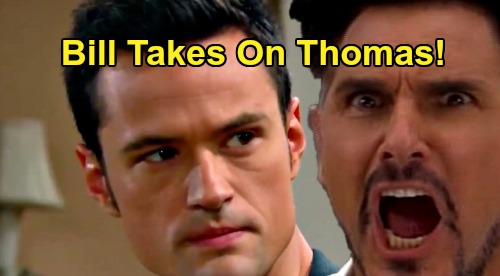 The Bold and the Beautiful (B&B) spoilers tease that Thomas Forrester’s (Matthew Atkinson) plans are bound to bring some danger. There’s been far too much talk about how dangerous Thomas is, so that has to be leading somewhere. Liam Spencer (Scott Clifton) has a dangerous plan of his own – although he’s got good intentions. He wants to expose Thomas, but this is obviously a pretty risky situation.

The closer Zoe Buckingham (Kiara Barnes) gets to Thomas, the more likely it becomes that she’ll shift her allegiance. If Zoe ends up spilling what Liam and Steffy Forrester (Jacqueline MacInnes Wood) have in mind, the results could be catastrophic. It could lead to serious consequences for them and anyone else who stands in his way.

What will the outcome be at the end of all this? B&B seems to be setting up more destruction, and Bill Spencer’s (Don Diamont) adult sons could pay the price. We can’t forget that Sally Spectra (Courtney Hope) made that ominous comment about how things would be OK with Wyatt Spencer (Darin Brooks) – even if it KILLED her.

That doesn’t necessarily mean Sally will die, but it’s a possibility to consider. It’s also possible Sally will be seriously injured as a result of whatever crazy stunt Thomas pulls next. If Sally ends up dead or in a coma, Wyatt would obviously be devastated. His relationship with Sally may not be perfect, but he loves her. Likewise, Sally may not be Wyatt’s first choice for his son, but he respects the choice he’s made.

So let’s combine that with some potential heartbreak for Liam. If Thomas indeed learns what Liam’s plotting as we suspect he will, he’s sure to sabotage Liam in some way. The easiest way would be to poison Hope against him. Thomas could use a variety of tactics like playing the victim and pointing out that Liam trusted Steffy Forrester (Jacqueline MacInnes Wood) to help him, not Hope. He could make it seem like he truly wanted to change, but they all ganged up on him.

Thomas could even arrange some compromising position where it looks like Steffy and Liam cheated. Compromising positions have become common on The Bold and the Beautiful over the years. They’re a great strategy to set up “cheating” that isn’t really cheating.

Still, it could look like cheating to Hope. Thomas has many weapons in his arsenal and will undoubtedly sink lower than ever if it means getting a shot with her. Hope could break Liam’s heart if Thomas plays his cards right.

If Wyatt AND Liam get burned, who’s that going to enrage the most? “Dollar Bill” of course! This would be the ideal time to get Bill back in the action. If anyone can truly take Thomas down, it’s Bill Spencer.

Bill could get in touch with his dark side again and bring back some of that fire that fans love. Would you like to see Bill go up against Thomas? The Bold and the Beautiful spoilers say some exciting drama’s ahead, so stay tuned. We’ll give you updates as other B&B news comes in. Stick with the CBS soap and don’t forget to check CDL often for the latest Bold and the Beautiful spoilers, updates and news.