The Bold and the Beautiful Spoilers: Brooke and Hope Blame Taylor For Role In Beth Adoption Scam? 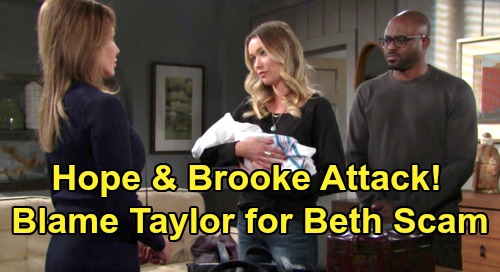 The Bold and the Beautiful spoilers tease that viewers are in for some dramatic and heart-warming scenes, as Hope Forrester (Annika Noelle) has an emotional reunion with her daughter Beth Spencer (River Davidson and Madeline Valdez). And while Hope will be thrilled to have her daughter back, she’ll soon want some answers about how her daughter could have been stolen and kept from her for so long.

Of course, Hope will soon find out that everything goes back to Reese Buckingham (Wayne Brady), who delivered her baby on Catalina Island. He was the mastermind of the plan and solely responsible for Beth’s abduction. Certainly, most of the blame for Hope and Liam Spencer’s (Scott Clifton) separation from their daughter will be placed squarely on Reese, and rightly so.

But of course, there were others who later found out about Beth’s existence and who kept the awful secret, and they have blame here as well. There’s Florence “Flo” Fulton (Katrina Bowden), who participated with Reese to further along an illegal adoption and kept the secret for months. Then there’s Zoe Buckingham (Kiara Barnes), Xander Avant (Adain Bradley), Shauna Fulton, and Thomas Forrester (Matthew Atkinson), who found out later, then kept the secret going.

But there’s another party involved who’s been off canvas and hasn’t received much attention recently, and that’s Taylor Hayes (Hunter Tylo). Now, Taylor obviously wasn’t involved in any wrongdoing, as she was totally deceived by Reese. But let’s face it, there were some red flags that one could argue that Taylor could have seen.

First off, Reese wanted to keep his identity as the adoption facilitator a secret from Steffy Forrester (Jacqueline MacInnes Wood) and everyone else. And then he wanted a large sum of cash, which Taylor paid him out of a briefcase rather than wiring or transferring money to a legitimate account.

Now, that doesn’t mean that Taylor should have immediately realized that this was an illegal adoption – after all, there was an alleged birth mother playing her role and making things look legit. But in hindsight, the whole adoption scenario with Reese – and especially the fact that Taylor kept his identity a secret – is going to look pretty bad, especially to Hope & Liam…and most definitely to Brooke Forrester (Katherine Kelly Lang).

Once the dust settles and everyone starts asking questions about how this horrible thing could have happened to Hope, Liam, and Beth, Taylor’s role in it all is going to come out, and Hope and Brooke are going to be peeved. As a general rule, Brooke doesn’t like Taylor anyway, and she’s very sensitive to anything Taylor does that impacts her family, so this will probably blow Brooke away.

Of course, it doesn’t seem that Taylor did anything illegal here, as she was duped by the real criminal in the matter, but that doesn’t mean that Brooke and Hope won’t hold her partly responsible for the whole mess. B&B spoilers tease that there will be some serious fallout for Taylor, and even for Steffy, for not asking more questions and noticing what now seem like clear red flags about the adoption.

What do you think? Will Hope and Brooke place blame on Taylor for the situation with Beth? Stay tuned to the CBS soap and don’t forget to check CDL often for the latest Bold and the Beautiful spoilers, updates, and news.