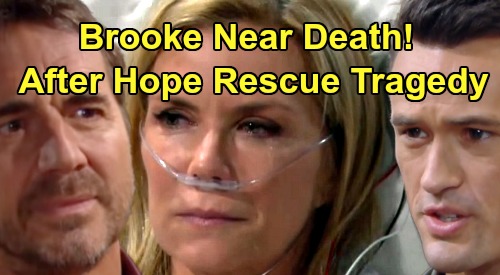 The Bold and the Beautiful (B&B) spoilers tease that Thomas Forrester’s (Matthew Atkinson) actions could have devastating consequences. B&B fans know Thomas is totally obsessed with Hope Forrester (Annika Noelle). He’s convinced he can win back this woman who doesn’t love him, doesn’t trust him and honestly doesn’t want anything to do with him now.

Thomas made the ruthless decision to hide the truth about Beth Spencer (River Davidson and Madeline Valdez), but he felt it was his only option. Hope would’ve scampered right back to Liam if Thomas had come clean – just as she’s doing now. Even so, Thomas will become increasingly fixated on repairing his marriage and getting that “Thope” future he planned.

Thomas Forresters Plans Will Take A Tragic And Terrible Turn

The Bold and the Beautiful spoilers say Thomas’ plans will take a terrible turn soon enough. In the week ahead, Brooke Forrester (Katherine Kelly Lang) will get a clue about Thomas’ latest scheme. She’ll realize Hope could be in grave danger, so she’ll rush to stop Thomas before it’s too late. Unfortunately, Brooke could put herself in grave danger as a result.

During the week of August 26-30, Brooke will focus on her rescue strategy. She’ll put a quick plan of her own in motion as she fights to protect her daughter. Once Brooke sets this in motion, a tragic outcome will await. B&B spoilers state that the Logans and Forresters will have to deal with the heartbreaking aftermath.

The two families mentioned here provide an interesting hint. It sounds like someone will be injured that affects both the Logan clan and the Forrester fam. Brooke would certainly fit the bill. She’s married to Ridge Forrester (Thorsten Kaye), who is Thomas’ father. Putting Brooke at the center of this disaster makes perfect sense.

Could Brooke Forrester Take A Dangerous Tumble Or Be Shot?

The Bold and the Beautiful spoilers say Ridge will be pushed to his limit before long, so that may involve Thomas causing harm to Brooke. Of course, we can’t imagine Thomas would set out to kill his stepmom. Since Matthew Atkinson recently suggested Thomas could be redeemed in an issue of Soap Opera Digest, that pretty much guarantees this won’t be a murder attempt.

However, Brooke could easily take a tumble from a great height or get shot by mistake. Just imagine the fierce father-son battle that would set up! Ridge will really let Thomas have it if Brooke lands in a coma fighting for her life. Dr. Jordan Armstrong (Vincent Irizarry) will come on the scene starting August 26, so Brooke may be his dying patient.

It sounds like some exciting material’s on the way. We’ll give you updates as other B&B news comes in. Stay tuned to the CBS soap and don’t forget to check CDL often for the latest Bold and the Beautiful spoilers, updates and news.