BY Marcy Cohen on May 28, 2019 | Comments: 2 comments
Related : Soap Opera, Spoiler, Television, The Bold and the Beautiful 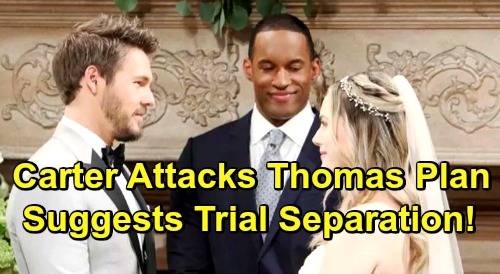 The Bold and the Beautiful (B&B) spoilers tease that Liam Spencer (Scott Clifton) and Hope Spencer (Annika Noelle) will need some help. They’ll turn to Carter Walton (Lawrence Saint-Victor) as they move forward with their plan to end their marriage. The news will leave Carter disappointed and distraught for the once happy couple. It looks like Carter may try to talk Hope and Liam out of this.

Since Hope’s really the one pushing for it, Carter will mainly focus on her side of the situation. He’ll certainly understand that Hope’s loss deeply affected her. She’ll never get over the pain of losing Beth Spencer, but Carter probably won’t think this is the right way to deal with her grief.

The Bold and the Beautiful spoilers say Carter will offer his professional guidance, but he’ll add some personal words of wisdom as well. Perhaps he’ll argue that Hope should take a little more time to decide. Many couples do a trial separation before they go any further. A break can sometimes put things in perspective and help a pair see that they’re meant to be together after all.

Even if that doesn’t happen in Hope and Liam’s case, Carter may not see the harm in giving it a try. Thomas Forrester (Matthew Atkinson), on the other hand, will definitely see the harm! He won’t want Hope to lose her resolve and move backwards again. Thomas expects a bright future with Hope and Douglas Forrester (Henry Joseph Samiri), so he’ll be stunned and irritated when Carter stands in his way.

During the week of June 3-7, B&B fans can expect Thomas to fight back on the issue. Perhaps he’ll walk in on Hope and Carter’s discussion, which would give Thomas the opportunity to weigh in. He’ll feel like Hope’s instincts were correct, so he’ll want her to stick to them.

Thomas may remind Hope of why she’s doing this – to be a mom to Douglas and let Liam be a full-time dad to Kelly Spencer (Zoe Pennington and Chloe Teperman) and “Phoebe Forrester” (River Davidson and Madeline Valdez). The Bold and the Beautiful spoilers say Thomas will go against Carter’s advice and try to make Hope see that ending her marriage is the only answer.

Hope will fall for Thomas’ manipulation once again, so he’ll get his wish for now. We’ll give you updates as other B&B details emerge. Stay tuned to the CBS soap and don’t forget to check CDL often for the latest Bold and the Beautiful spoilers, updates, and news.