The Bold and the Beautiful Spoilers: Creepy Text Forces Reese to Fake Baby Death – Doc Sacrifices Lope’s Daughter for His Own

BY Heather Hughes on January 1, 2019 | Comments: one comment
Related : Soap Opera, Spoiler, Television, The Bold and the Beautiful 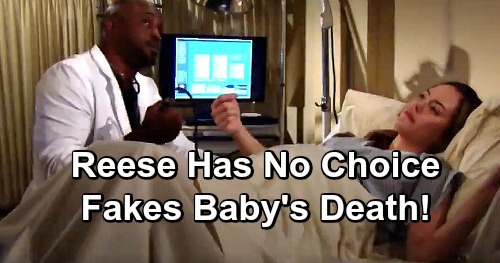 The Bold and the Beautiful (B&B) spoilers tease that Dr. Reese Buckingham (Wayne Brady) will face a decision that could affect many lives, including his own daughter’s. Zoe Buckingham (Kiara Barnes) is being threatened by a thug who’s been sent to collect money. Reese has some serious gambling debt and it’s time to pay up. If he doesn’t, there could be dire consequences for Zoe.

Reese is desperately trying to figure something out, but he’ll be sidetracked by an unexpected delivery. The Bold and the Beautiful spoilers say Hope Spencer (Annika Noelle) will arrive at the clinic in need of assistance. Thanks to a helpful Catalina Island hotel manager, Hope will make it to Reese in the nick of time.

Reese will assure Hope that she’s in good hands. He’ll tell Hope all about his experience and urge her to just relax. Reese will know it’s going to be tough without Liam Spencer (Scott Clifton) around, but he’ll insist that they can do this together. He’ll seem sweet and trustworthy, so Hope won’t have any suspicions when things take a shady turn.

B&B spoilers say the thug will make some creepy surveillance photos. He’ll watch Zoe’s every move and snap some shots to go along with his warnings. When Reese receives the photos via text, he’ll immediately be unnerved. Reese will realize these certainly aren’t empty threats. There’s real danger to Zoe and it’s rapidly approaching.

If Reese doesn’t do something fast, Zoe could die and it’d be all his fault. It turns out these pics will cause Reese to make a crucial decision. Without the thug’s texts, Hope’s delivery might’ve had a very different outcome.

Once Reese is truly backed into a corner, he’ll take advantage of an opportunity that falls into his lap. The clinic will lose power, so Reese can do some baby stealing under cover of darkness. He’ll most likely plan to make some major dough off the kid, so Hope may be handed some other patient’s dead child. Liam’s in for a shock when he finally arrives and gets awful news about Beth.

The Bold and the Beautiful spoilers say Reese’s split-second decision will affect several families. Some enemies will be drawn together and some loved ones will be torn apart! We’ll give you updates as other B&B details emerge. Stay tuned to the CBS soap and don’t forget to check CDL often for the latest Bold and the Beautiful spoilers, updates and news.