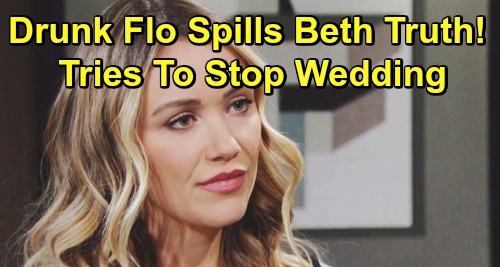 The Bold and the Beautiful (B&B) spoilers tease that Florence “Flo” Fulton (Katrina Bowden) will need something to calm her nerves. She’ll be battling loads of guilt as well once she realizes Thomas Forrester (Matthew Atkinson) has Hope Logan (Annika Noelle) on the fast-track to marriage.

Flo knows Thomas can be quite menacing when he wants to be. He’s also keeping the truth about Beth Spencer from Hope, so he’s certainly not a worthy groom.

Thomas is hiding this secret for mostly selfish reasons. He indeed wants Douglas Forrester (Henry Joseph Samiri) to have a new mom, but he’s mainly interested in making Hope his wife.

Once Flo hears about the rushed wedding plans, she’ll feel guiltier than ever. Flo will just wish she could make all this remorse go away – and she’ll think she’s found the solution. It just won’t be a healthy or helpful one!

The Bold and the Beautiful spoilers say Flo will decide to have a drink…and another…and another. She’ll just want to forget about her problems for a while, so she’ll use alcohol to do it. It won’t be long until Flo’s as drunk as drunk can be. That’ll leave Zoe Buckingham (Kiara Barnes) to deal with Flo’s mess, which will get far worse soon enough.

B&B fans can expect total panic for Zoe as Flo makes a drunken declaration. Flo will announce that it’s time for the truth to come out. She’ll determine that she needs to get to Hope and Thomas’ ceremony before they tie the knot. Zoe will insist Flo’s plastered and argue that she’ll have a different view once she sobers up. She’ll beg Flo to stop threatening to destroy their alliance.

Nevertheless, Flo will be adamant that the whole story needs to be exposed. She’ll plan to head over to the wedding and stop it with a full confession. The Bold and the Beautiful spoilers say Zoe will frantically try to get in touch with Thomas. She’ll fear Flo’s going to blow this for all of them – and she just might!

Of course, Flo won’t be blabbing about Beth and destroying the nuptials. That’d be far too easy. Instead, perhaps Flo will part of the conversation Liam overhears. The Bold and the Beautiful spoilers say Liam will eavesdrop on something he shouldn’t during the week of July 22-26.

It’s possible that’ll be immediately following the ceremony, which would leave Flo as a drunken wildcard. Will she finally spill a hint that Beth’s still alive? Will Liam pick up on the fact that something’s not right? The Bold and the Beautiful spoilers say Liam will indeed to some digging soon to see what he can uncover.