The Bold and the Beautiful Spoilers: Drunk Ridge Goes To Bed with Shauna – Awakens to Horror and Hangover

BY Heather Hughes on September 5, 2019 | Comments: one comment
Related : Soap Opera, Spoiler, Television, The Bold and the Beautiful 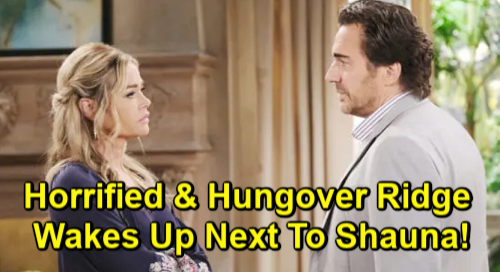 The Bold and the Beautiful (B&B) spoilers tease that the pressure will really get to Ridge Forrester (Thorsten Kaye). He’s already dealing with a lot since Brooke Forrester (Katherine Kelly Lang) shoved Thomas Forrester (Matthew Atkinson) off a cliff.

Ridge also must face the reality of what his son has done. He’ll reel as Thomas confesses what happened the night Emma Barber (Nia Sioux) died, so his problems will just keep getting worse.

During the week of September 9-13, Ridge will be forced to make some choices he hates. It looks like saving Thomas from punishment will mean cutting a deal for Florence “Flo” Fulton (Katrina Bowden), too. That’ll provoke Brooke’s fury since she wants Flo to pay for Hope Logan’s (Annika Noelle) pain. Ridge wants Flo to pay as well, but his son will come first – and his marriage will pretty much implode.

Bridge Conflict Will Erupt Into The Fight Of The Century

The Bold and the Beautiful spoilers say Ridge and Brooke’s conflict will erupt like never before. They’ll have the fight of the century, which will lead to Ridge walking out on his wife. Brooke will be left to mope while Ridge does the same at Bikini Bar. He’ll drown his sorrows, which will turn out to be a terrible decision. As the night goes on, Ridge will just keep downing drinks until he’s plastered.

That’s when Shauna Fulton (Denise Richards) will enter the picture. She’ll get updates on the latest marriage blowup from Brooke before joining Ridge at the bar. It certainly sounds like Shauna will know exactly what she’s doing. Ridge will be incredibly drunk, so he won’t be in any kind of shape to make good choices. The ball will be in Shauna’s court, so she’ll take the very dangerous lead.

The next morning, Ridge will be horrified and hungover when he awakens next to Shauna. The week of September 16-20 will bring this B&B shocker, which is sure to leave Ridge in a bind.

Ridge Forrester Will Fear His Wife’s Wrath – Will He Cover It Up?

His marriage may be in turmoil, but that doesn’t give Ridge an excuse to cheat. The Bold and the Beautiful spoilers say Ridge will fear Brooke’s wrath, so he may try to cover this up.

Of course, there’s no guarantee Ridge will actually do the deed with Shauna. He probably won’t remember much of anything, so Shauna could easily lie about them sleeping together. It may be part of a twisted plan to dupe Ridge and stir the pot again.

However, there’s also a chance Ridge will truly have sex with Shauna. Either way, he’ll apparently wake up in her bed and that isn’t good news for Ridge’s marriage! We’ll keep you posted as other B&B details emerge. Stay tuned to the CBS soap and don’t forget to check CDL often for the latest Bold and the Beautiful spoilers, updates and news.