The Bold and the Beautiful Spoilers: Flo Freaks Over Smitten Shauna’s Feelings for Ridge – Mom’s Crush Ends in Disaster 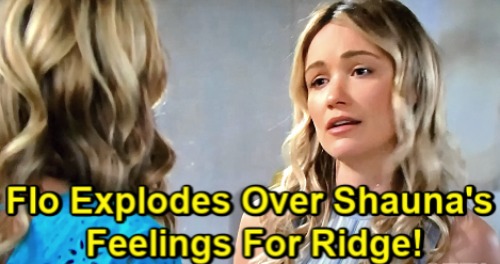 The Bold and the Beautiful (B&B) spoilers tease that Ridge Forrester (Thorsten Kaye) will be floored after his drunken evening brings consequences. He’ll awaken in bed with Shauna Fulton (Denise Richards), so he’ll be truly horrified.

Ridge will immediately worry about hurting Brooke Forrester (Katherine Kelly Lang), but Shauna will offer reassurance. She’ll suggest they can keep this little incident to themselves.

After Shauna makes a pact with Ridge, she’ll struggle to get him out of her head. There’ll be something about the rugged Forrester that she’s drawn to. The fact that Ridge helped Florence “Flo” Fulton (Katrina Bowden) gain her freedom was seemingly the start of this. Shauna was grateful that Ridge refused to oppose Flo’s immunity deal. He made the decision for Thomas Forrester’s (Matthew Atkinson) sake, but it still meant a lot to Shauna.

Shauna Fulton Just Can’t Get Her Mind Off Ridge Forrester

Following Shauna and Ridge’s night together, Shauna’s mind will be stuck on steamy thoughts. A switch will turn on that can’t be turned off. The Bold and the Beautiful spoilers say Flo will suspect something’s up, so she’ll likely grill her mom. It won’t be long until Flo realizes what’s going on here. She’ll explode when she determines that Shauna has feelings for Ridge.

To make matters worse, those feelings will still be growing. Shauna’s crush could turn into real love if she’s not careful. Of course, that will be dangerous for Ridge as well.

B&B fans know he doesn’t have a great track record when it comes to staying away from women who are attracted to him. Ridge almost always surrenders to temptation, so there’ll be trouble if he develops real feelings for Shauna, too.

Flo Fulton Will Do Her Best To Shut This Down Immediately

Flo will do her best to shut this down right away. As soon as Flo figures out what’s in her mom’s heart, she’ll insist Shauna can’t let herself fall for Ridge. Flo may argue that Shauna can pick almost any other guy out there. Choosing Ridge is only going to bring heartache and set up more Logan drama.

Shauna may tell Flo she’s got her feelings under control, but will that really be the case? The Bold and the Beautiful spoilers say Ridge and Shauna will move into risky territory, so there’s always the possibility of a full-blown affair.