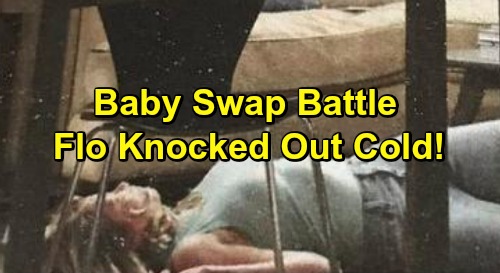 The Bold and the Beautiful (B&B) spoilers tease that a shocking showdown is brewing. First, let’s talk about Florence “Flo” Fulton’s (Katrina Bowden) persistent guilt. Now that she knows she’s a Logan, that guilt is stronger than ever. Flo knows how much she hurt Hope Spencer (Annika Noelle) by helping Dr. Reese Buckingham (Wayne Brady) with the baby swap, so her silence will become unbearable.

It looks like Flo will once again by on a mission to tell the truth, but there’ll naturally be some obstacles to get in her way. Shauna Fulton (Denise Richards) will do her best to talk her daughter out of this, but it seems Flo’s mind will be made up. Zoe Buckingham (Kiara Barnes) also has a lot to lose here. She’ll get in on all this as the B&B drama spirals out of control.

The Bold and the Beautiful spoilers say Flo will take a blow to the head. She’ll fall to the floor at her apartment, but who will strike that blow? We know Shauna and Zoe will face off while Flo’s out of it. That means they’ll clash over how to proceed, so one of them should think Flo’s right about coming clean while the other demands the secret be kept.

Since Shauna will end up pointing a gun at Zoe, we can assume she’ll still be on “Team Don’t Tell Hope.” How far will she go to protect the truth about Steffy Forrester’s (Jacqueline MacInnes Wood) adopted daughter? Will Zoe make an agreement with Shauna in exchange for her life? Some tough choices will have to be made on new B&B episodes during the week of April 22-26.

As for Flo, word has it she may have some memory issues thanks to that head injury. That makes sense for the story since Flo’s guilt will suddenly disappear. An amnesia plot point would leave Shauna and Zoe to hide the big secret – from Flo and everyone else!