The Bold and the Beautiful Spoilers: Flo Released From Prison – Shauna Convinces Quinn To Help Daughter

BY hellodrdavis on August 26, 2019 | Comments: one comment
Related : Soap Opera, Spoiler, Television, The Bold and the Beautiful 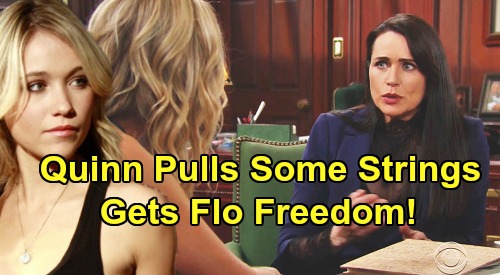 The Bold and the Beautiful spoilers tease that Shauna Fulton (Denise Richards) will be at her wit’s end. She’s been feeling very guilty about the fate of her daughter, Florence “Flo” Fulton (Katrina Bowden).  As B&B viewers know, Shauna strongly encouraged her daughter to keep the secret about Beth Spencer (River Davidson and Madeline Valdez) in order to preserve her standing in the Logan family. Now Shauna’s seriously regretting that decision.

Flo was recently arrested and carted off to jail for her role in Reese Buckingham’s (Wayne Brady) baby swap and adoption scam. Sure, she’s not in the kind of legal trouble that Reese is, since she didn’t actually kidnap Beth, but she still participated in a fraudulent adoption and knew about the kidnapping and chose to keep quiet for months. She’s looking at some serious charges, and she’s got no one to help her out of it.

Of course, Flo’s got Shauna on her side, but Shauna hardly has the resources to help Flo out of her legal problems. Flo is pretty well stuck in jail right now, since Shauna doesn’t have the resources to pay her bail, assuming that bail gets set for her. Since she’s probably not a flight risk, chances are bail will be set, but there’s no way that Shauna will be able to spring her daughter or get her legal assistance.

And that’s where Shauna hopes that Quinn Forrester (Rena Sofer) will come in. According to B&B spoilers, Shauna will be feeling devastated after she visits Flo in jail. She’ll want to help her daughter, but she won’t know how, and she’ll be feeling desperate. She’ll end up going to Quinn and asking for her help in the matter. Shauna will pour her heart out to Quinn, and Quinn will find herself sympathetic.

B&B viewers will remember that Quinn got quite upset at a family gathering when the Forresters and the Logans were badmouthing Flo for her role in keeping Beth from Hope Logan (Annika Noelle) and Liam Spencer (Scott Clifton).

Will This Cause Tension Between Quinn And Eric Forrester?

As someone who herself has done some questionable things in the past, Quinn will naturally identify with Flo, so she will probably be willing to help Shauna by helping Flo. But the logistics of everything may be tricky, since Quinn’s resources come directly from Eric Forrester (John McCook). Quinn might have to do some finagling to get Flo the legal and financial help she needs, but The Bold and the Beautiful spoilers say it looks like she’ll get the job done.

We’ll see what happens here, but it looks like Quinn might find a way to get Flo sprung on bail, which will have some serious ramifications for everyone. Do you expect to see a major family blowup when Flo’s released? Stay tuned to the CBS soap and don’t forget to check CDL often for the latest Bold and the Beautiful spoilers, updates, and news.