The Bold and the Beautiful Spoilers: Flo Wants Wyatt – Wally Endangered, Can Sally Compete With Quinn? 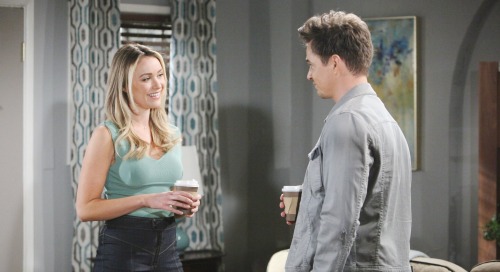 The Bold and the Beautiful spoilers tease that Flo Fulton (Katrina Bowden) is still in love with Wyatt Spencer (Darin Brooks). Her criminal actions with Phoebe will surely be exposed in the future, but for now Miss Fulton’s revisit of the past will likely endanger Wally.

Sally (Courtney Hope) is wise. She knows that Wyatt is a very eligible bachelor. Hardly the nondescript young man he used to be in Las Vegas, Nevada, when he and Flo were high school sweethearts. Today’s Wyatt is at least a mega-millionaire, if not a billionaire heir to the Spencer family fortune that his father has generated though guts and guile.

As B&B fans have learned, Wyatt isn’t the only tie to Flo. Her mother, Shauna (Denise Richards), who will soon be forthcoming, was best friends with Quinn (Rena Sofer).

The above tease to the audience, along with Bowden’s head shot now appearing on B&B’s online cast page, entrenches Flo as a regular character on the show. So, the Wayne Brady (Reese) guest spot not only served as a vehicle for the evolving Phoebe storyline, where Lope thinks Beth died, when she didn’t, but it also set up Flo as an impact player in L.A.

Sally was thought to be gone from Cali last year. Hope’s character was seemingly at her own storyline end, but then she appeared one day at the Bikini Bar and Wyatt was soon smitten. She moved in and Wally emerged. It supplanted Watie, with Brooks solid comedic chops now being reciprocated by Hope’s alter ego.

Conflict between Wyatt and Sally is also building on a parallel track, as Eric’s (John McCook) offer to Miss Spectra has been accepted. Wyatt was miffed that Sally reneged on the plan to have her further Spectra Fashions’ under the Spencer umbrella and corporate moniker. But Forrester Creations’ ability to allow Sally to become an influencer within their iconic fashion house and for the Spectra name to be used was too good to dismiss.

So, Wyatt’s mother, who is Eric’s wife, just so happens to be Flo’s mother’s best friend from Vegas, where the former Miss Fuller and her son, then in the jewelry business, used to live back in the day before both characters debuted on the show. Yes, created backstories are being furthered this spring by B&B.

Flo is a threat, as Sally will soon see. Another kiss that Wyatt receives from his former girlfriend will confirm Flo’s intentions and spark the stark of a new daytime triangle.