The Bold and the Beautiful Spoilers: Friday, April 26 – Zoe & Flo Brawl – Katie Changes Her Mind, Then Spots Bill With Shauna

BY hellodrdavis on April 25, 2019 | Comments: one comment
Related : Soap Opera, Spoiler, Television, The Bold and the Beautiful 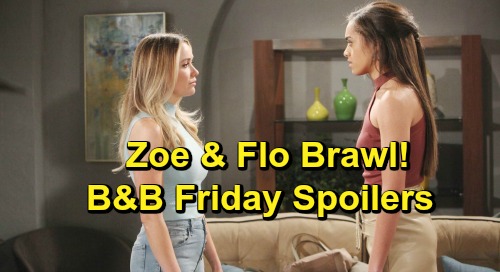 The Bold and the Beautiful spoilers for Friday, April 26, tease that Zoe Buckingham (Kiara Barnes) will blow her top. She’s just learned from Brooke Forrester (Katherine Kelly Lang) that Florence “Flo” Fulton (Katrina Bowden) is a Logan, and she immediately assumed that Flo was running another scam on Hope Spencer (Annika Noelle) and the Logan clan.

Now Zoe’s at Flo’s apartment, and Flo is once again threatening to tell Hope the truth that her baby is alive and living as “Phoebe Forrester” (Isabella de Armas and Rosalind Aune). It’s all going to be too much for Zoe to bear, and according to B&B spoilers, the two women will get into a colossal argument.

Zoe will decide that she’s had about enough of Flo’s constant threats to spill the truth to Hope, and she’ll be tired of continually having to remind Flo exactly what’s at stake if the truth comes out. According to B&B spoilers, as the women argue, things will get physical, and Flo will end up on the floor.

What’s more, Shauna Fulton (Denise Richards) will return to the apartment from her liquid lunch with Bill Spencer (Don Diamont) and find Flo and Zoe fighting. Suddenly, she’ll pull out a gun and defend her daughter against Zoe. It looks like Shauna will hold Zoe at gunpoint and end the altercation.

Fortunately, B&B spoilers indicate that the women will soon re-group and patch things up. It seems that Shauna will talk some sense into Zoe and Flo, and she’ll rally everyone into making a secret pact to never tell the truth about Reese Buckingham’s (Wayne Brady) actions and Flo’s involvement in the baby swap and adoption of Hope’s baby to Steffy Forrester (Jacqueline MacInnes Wood).

Meanwhile, on the new episode of B&B on Friday, April 26, Katie Logan (Heather Tom) will be in for another surprise. She already got a big surprise when Bill suddenly proposed to her in his office. Of course, Katie promptly told Bill no, and then ran to Brooke with the news.

On Friday’s episode, Katie will have a conversation with Brooke and Donna Logan (Jennifer Gareis) about the whole situation, and both sisters will urge Katie to give Bill another chance. According to B&B spoilers, Katie will be persuaded by what her sisters have to say, and she’ll head out to Il Giardino to find Bill and tell him that she changed her mind.

Unfortunately, she’ll get to Bill right as he’s having his liquid lunch with Shauna. Katie will spot the two of them together looking very close and chummy, and that will stop Katie dead in her tracks. But will it make her rethink her decision to accept Bill’s proposal?