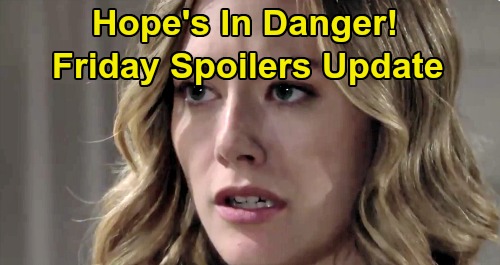 The Bold and the Beautiful (B&B) spoilers update for Friday, August 2, tease that Florence “Flo” Fulton (Katrina Bowden) will have quite a tale to tell. She just admitted what Liam Spencer (Scott Clifton) already knew, so now Wyatt Spencer (Darin Brooks) knows, too. Flo was never pregnant and isn’t “Phoebe Forrester’s” (River Davidson and Madeline Valdez) birth mom like she previously claimed.

Since Flo confessed Hope Forrester (Annika Noelle) is the baby’s true mother, she’ll have to explain how that’s possible. B&B fans know Reese Buckingham (Wayne Brady) is the one who orchestrated this scheme. He roped Flo into it, so she’ll fill Wyatt and Liam in on what was asked of her.

Flo will reveal that Reese swapped Beth Spencer for a dead baby on Catalina Island, which led to “Lope’s” intense mourning. She’ll mention how she knew Reese from Vegas, so she posed as the birth mom for the adoption scam. Of course, Flo never could’ve predicted that fate would bring her back to Wyatt or point her in the direction of her family, the Logans.

The Bold and the Beautiful spoilers say Flo will be devastated over what she’s done. She’ll express deep remorse for her actions after she spills all. Liam will remain angry as he wraps his head around the new facts. He’ll also hear how Thomas Forrester (Matthew Atkinson) found out truth and threatened Flo’s life, so he’ll worry about the danger Hope could be in.

Liam will rush off in hopes of tracking down the duped bride. He’ll want to tell Hope what a creep Thomas is and share the shocking news about Beth. As for Wyatt, his shock will slowly turn to rage. B&B fans can expect Flo to get an earful from her disappointed beau. Wyatt thought he was with an honest woman, but she’s been lying to him all along.

Over with Thomas, he’ll get updates on Liam’s hot pursuit from Steffy Forrester (Jacqueline MacInnes Wood). After Steffy calls and brings Thomas up to speed on Liam’s claims, Thomas may counter that it’s crazy talk. He might argue that Liam’s losing it, but Steffy’s fears will continue to rev up.

Meanwhile, Thomas will ditch his honeymoon plans and try to make a break for it with Hope. He’ll leave Hope confused and terrified, but he’ll try to make sure she does what she’s told. The Bold and the Beautiful spoilers say this is all building to a dramatic showdown next week. Liam and Thomas are set to have the ultimate faceoff!

It sounds like some fantastic scenes are coming up. We’ll keep you posted as other B&B details emerge. Stay tuned to the CBS soap and don’t forget to check CDL often for the latest Bold and the Beautiful spoilers, updates and news.