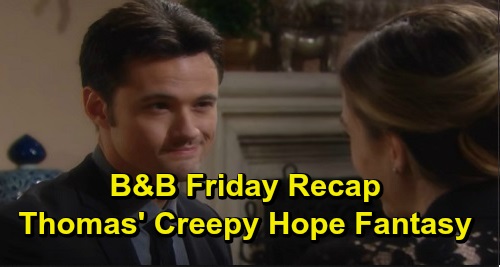 The Bold and the Beautiful spoilers recap for Friday, December 13, tease that Steffy Forrester (Jacqueline MacInnes Wood) and Hope Logan (Annika Noelle) finished up their conversation in the CEO office at Forrester, with Hope reiterating that she was all in the fashion competition but would not work with Thomas Forrester (Matthew Atkinson) as her designer. They then lamented about Brooke Forrester (Katherine Kelly Lang) and Ridge Forrester’s (Thorsten Kaye) divorce.

Over in the design office, Thomas insisted to Liam Spencer (Scott Clifton) that he wasn’t a threat, but Liam refused to buy his mea culpa routine. Liam again brought up Thomas’ indecent proposal, frustrating Thomas. The two men argued over familiar territory, and Liam insisted that he was onto Thomas and that Thomas would never have a future with Hope.

Meanwhile, Brooke brooded at her place, divorce papers in hand. Hope then came in and embraced her mom and expressed her sympathies about the divorce. Hope couldn’t help but feeling partially responsible, since Ridge wasn’t happy about her sharing custody of Douglas Forrester (Henry Joseph Samiri). Brooke said that she simply couldn’t forgive Thomas in the way Ridge wanted, but that she hoped that Ridge wasn’t filing the divorce papers.

Hope then shared Thomas’ proposition about how he wanted to work with her on Hope For The Future, and Brooke was mortified but relieved that hope turned him down. Brooke thought that Thomas probably wasn’t taking another rejection from Hope well and said that she was worried because Thomas was clearly obsessed.

At the Forrester mansion, Thomas arrived to find Shauna Fulton (Denise Richards). He mused that he figured she’d be out celebrating, but Shauna insisted that she’d never be excited about the end of a marriage. Thomas then went on about how great she and Ridge would be together, and about how Ridge lights up when she’s around him. Thomas probed for details, and Shauna divulged that she and Ridge haven’t made love.

Thomas then encouraged Shana to go after Ridge and take the opportunity that she’s been given before ranting a bit about Brooke. Shauna stated that she didn’t have anything against Brooke, just that she wished Brooke would give Flo Fulton (Katrina Bowden) a break. Thomas said that he’d gladly welcome Shauna into the family, and Shauna cautioned that they shouldn’t get ahead of themselves.

Talk then turned to Hope, and Thomas noted that he’s not that obsessed person anymore, but Shauna said that he still wanted Hope. Thomas acknowledged that Hope is with Liam right now, but that he’s working on himself and that he still believes that he and Hope will end up together.

Back in the Forrester CEO office, Liam and Steffy talked, and Liam broached the subject of Thomas. Liam said that he’s not buying the “I’m a changed man” persona that Thomas is projecting right now, and that he wants to prove that Thomas is still dangerous. Steffy then asked if Liam was wanting her to help take down her own brother, and Liam said no, but that he wanted her to help him find out the truth.

Liam went on to say that he knows Thomas is chasing after Hope again, but Steffy countered that Thomas was trying to be a better person, although she didn’t know how long that would last. Liam said the he knew he was putting Steffy in a tough spot, but he wanted to quietly find out what Thomas was up to – that it was the only way. Steffy then asked if Liam was asking her to go behind Thomas’ back.

Alone at the Forrester mansion, Thomas sipped a drink and gazed at Quinn Forrester’s (Rena Sofer) portrait. He imagined that it was a portrait of Hope, and he envisioned a scenario 10 years into the future. He flashed to an older version of himself and Hope talking about Brooke’s untimely death and about how Douglas was out taking his car for a spin. The older version of Hope stated that she was sad about Brooke, but that she was exactly where she belongs – by his side.

In this future scenario, Liam and Steffy were reunited as a family with Kelly Spencer (Zoe Pennington), and Ridge was with Shauna. Hope mused that she was married to the most amazing, talented, and handsome man…and that he was all hers. As they kissed passionately, Thomas snapped back to the present and smiled big. To himself he said, “Goodbye Brooke, hello happiness.”