BY hellodrdavis on December 20, 2019 | Comments: one comment
Related : Soap Opera, Spoiler, Television, The Bold and the Beautiful 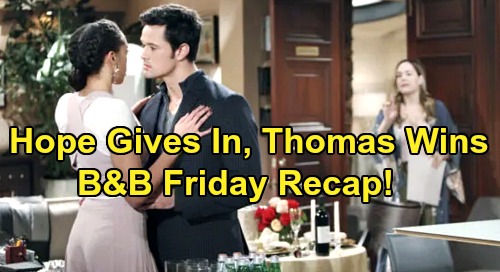 The Bold and the Beautiful spoilers recap for Friday, December 20, reveal that Hope Logan (Annika Noelle) questioned Steffy Forrester’s (Jacqueline MacInnes Wood) decision to rehire Zoe Buckingham (Kiara Barnes). But Steffy said that she had made her decision, and that she believed that Zoe had something to offer. Later, Liam Spencer (Scott Clifton) arrived to see Steffy and learned that she had rehired Zoe.

Liam was happy that his plan was in motion, but Steffy remained torn. Steffy noted that Hope was really upset about the decision, and that she gets why. Steffy said she was sickened by the situation, but Liam assured her that it was necessary for them to find out what was going on with Thomas Forrester (Matthew Atkinson), and that Thomas’ interest in Zoe was likely a ploy on his part.

Meanwhile, over in the design office, Zoe thanked Thomas for coming through for her. Thomas acted totally into Zoe and will told her that he’s lucky to be moving on with her. Thomas then saw Hope approaching the room and quickly pulled Zoe into a kiss, which Hope witnessed. Zoe attempted to ask Hope for a second chance, but Hope flatly refused. Thomas then asked for a moment alone with Hope, and Zoe left the room after kissing Thomas again.

Thomas explained to a skeptical Hope that his connection with Zoe was real, and that they bonded over their shame for what they did. Thomas asked who Hope had chosen for her designer, and Hope revealed that she didn’t have anyone yet. Thomas then went on about how he just wanted to help her line succeed…all the while privately obsessing over her body. Ultimately Hope said that she would consider working with him.

In the CEO office, Zoe talked a bit with Steffy, who wanted to know what was going on between her and Thomas. Zoe replied that they had kissed and had gotten closer recently, which seemed strange to Steffy. Zoe also mentioned that Hope had witnessed the kiss, which Steffy thought sounded like a big red flag. She wondered if perhaps Thomas had wanted Hope to see the kiss, which puzzled Zoe.

At the Forrester mansion, Ridge Forrester (Thorsten Kaye) was happy to see Brooke Forrester (Katherine Kelly Lang), who arrived upset after having heard from Eric Forrester (John McCook) that Zoe had been rehired at Forrester Creations. She blasted Ridge for allowing “that liar” back to work. Ridge pointed out that it was Steffy’s call and that he was proud of her decision.

Ridge then took a call from Thomas, who thanked Ridge for giving Zoe another chance. Ridge expressed surprise that Thomas was interested romantically in Zoe, which Brooke overheard. After Ridge hung up, Brooke learned that Thomas and Zoe were now an item, and she expressed her skepticism over it. Brooke didn’t think that Thomas was over Hope at all, and she professed that Thomas was violent and that her daughter’s safety was at stake.

Back home at the cabin, Hope vented to Liam about how Steffy had rehired Zoe, which of course came as no surprise to Liam. But Liam acted like he was hearing it all for the first time. Hope shared how Thomas had moved on with Zoe, and how he had approached her again about Hope For The Future. Liam was incredulous to learn that Hope was actually considering working with Thomas.

After some back and forth about it, Liam stated that he couldn’t dictate who Hope could and couldn’t work for, and Hope decided to work with Thomas to save her line. She assured Liam that there was nothing that Thomas could do or say that would take her away from him, and that if he crossed any lines, then she would fire him.

Hope then called Thomas, who was still at Forrester Creations, and told him that she would bring him on to work together on Hope For The Future. Thomas was thrilled, and afterwards, as he sat sketching in the design office, viewers got a glimpse of what he was sketching, and it was a picture of him kissing Hope.