BY hellodrdavis on December 5, 2019 | Comments: one comment
Related : Soap Opera, Spoiler, Television, The Bold and the Beautiful 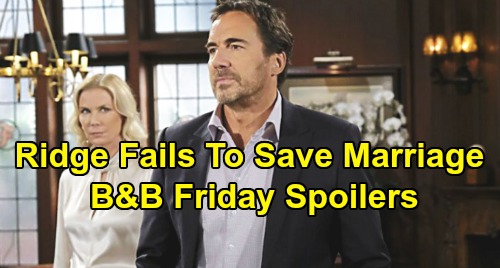 The Bold and the Beautiful spoilers for Friday, December 6, tease that Hope Logan (Annika Noelle) will be feeling the pressure. As B&B viewers know, she’s just heard a big pitch from Thomas Forrester (Matthew Atkinson) about how she should come back to Forrester Creations and work with him on the Hope For The Future (HFTF) line. Thomas even brought in models to show Hope some of the designs that he created for the future of the line.

And then, Douglas Forrester (Henry Joseph Samiri) ran in with a sign he had colored imploring his new mommy to work with Thomas on the HFTF line. Hope kindly protested that she wanted to stay home and watch Beth Spencer (River Davidson and Madeline Valdez), but Douglas sweetly offered to watch Beth himself and again asked Hope to work with his dad. It was a cute moment, but now what will Hope do?

Well, it was pretty clear that she was quite taken by Thomas’ designs, and that she was giving the idea of stepping back into leading the HFTF team some serious thought. But if she does it, then that will likely cause some friction with Liam Spencer (Scott Clifton), who really doesn’t want her to be working with Thomas. On Friday’s episode, Hope will likely reach a decision about the matter, and we’ll see what she decides.

Meanwhile, on the new episode of B&B on Friday, December 6, Ridge Forrester (Thorsten Kaye) will be on a very serious mission. He’ll have had divorce papers drawn up to end his marriage to Brooke Forrester (Katherine Kelly Lang), and he’ll be determined to sign them and to get Brooke to sign them, but he’ll want to make one last push to save his marriage first.

According to The Bold and the Beautiful spoilers, Ridge will personally take the divorce papers to Brooke along with a proposal. He’ll tell her that it doesn’t have to be this way, and that the two of them can stay married and work things out, but that to do so, she’s going to have to forgive Thomas. As B&B viewers know, Brooke’s feelings of animosity toward Thomas have been a problem in their marriage for months, and Ridge knows that the only way for them to be able to move forward is for Brooke to let it all go.

It looks like Ridge will tell Brooke that he’s willing to get past her recent lie about Thomas’ supposed death, when she and Hope kept their belief that Thomas was dead from him. He might also point out that he’s been willing to forgive her misdeeds, which also include pushing Thomas off a cliff, and that she needs to be willing to find forgiveness in her heart, too.

But will Brooke be willing to forgive Thomas in order to save her marriage? It’s not looking good, given that ongoing B&B spoilers indicate that Thomas is going to be very happy about Ridge’s ultimate decision regarding Brooke. That sounds an awful lot like he might be filing divorce papers. Time will tell what happens here, but given how Brooke feels toward Thomas, it seems unlikely that she’ll be willing to forgive him.