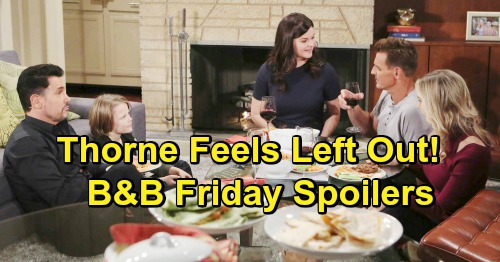 The Bold and the Beautiful spoilers for Friday, January 18, tease that things will go from bad to worse as Sally Spectra (Courtney Hope) tries to explain her gift of a puppy to Hope Spencer (Annika Noelle). Sally was hoping that the puppy would be therapeutic for Hope and offer her comfort as she’s grieving for Beth Spencer.

However, Hope didn’t appreciate the gift and totally melted down. She thought that Sally was trying to “replace” Beth with the puppy and took serious offense. It was a bad scene, and it looks like the drama will continue on Friday’s episode.

From Sally’s perspective, she was just trying to bring an adorable distraction, and a source of comfort, into Hope and Liam Spencer’s (Scott Clifton) life during a very dark time. We’ll see if Hope warms up to the puppy on Friday’s episode, or if she continues to be outraged by the gift.

Meanwhile, on the new episode of B&B on Friday, January 18, Thorne Forrester (Ingo Rademacher) will be feeling left out. Katie Forrester (Heather Tom), Bill Spencer (Don Diamont), and Will Spencer (Finnegan George) will enjoy spending family time together after dinner, and Thorne will watch from afar.

Of course, Thorne wasn’t too keen on Bill staying for dinner in the first place, but Will wanted his dad to stay, and Thorne wasn’t about to be the bad guy and say no. But as the evening progresses, Thorne will be forced to watch Bill, Katie, and Will interact, and he’ll start to get the feeling that he’s a fourth wheel.

This certainly isn’t how Thorne pictured family life when he decided to marry Katie. At that time, Bill was neglecting Will and Thorne stepped in as super stepdad. Will looked up to Thorne as a father-figure, but now Bill has reclaimed his role as dad, and Thorne is probably wondering exactly where he stands in the family.