The Bold and the Beautiful Spoilers: Friday, January 18 Update – Hope Fights Angry Instincts – Thorne’s Past Rushes Back to Him 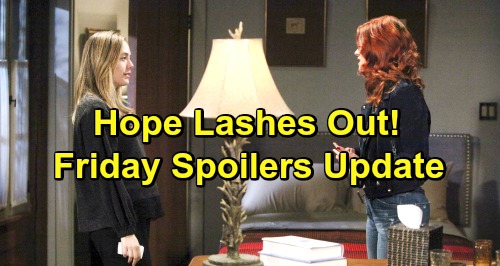 The Bold and the Beautiful (B&B) spoilers for Friday, January 18, tease that Thorne Forrester (Ingo Rademacher) will feel like the odd man out. Katie Forrester (Heather Tom) will continue to connect with Bill Spencer (Don Diamont) and their son, Will Spencer (Finnegan George). As Thorne watches the trio, he’ll see a happy family. Thorne may wonder if Katie secretly wants to be a reunited one.

Katie cares about Thorne, but it’s tough to believe they’re madly in love. The whole point of their marriage was to look good for the custody battle. They wanted to present the most stable option possible and make sure Will stayed in Katie’s home. None of that ended up mattering anyway since Katie now shares custody with Bill again.

Thorne will likely face major doubts about his future with Katie. This may be more about her and less about him. Although Thorne will be a little on the jealous side, a caring side may shine through, too.

Thorne might consider the idea that Katie would be happier with Bill. He can’t deny that Bill seems to have changed for the better. Bill has certainly stepped up when it comes to being there for Will.

If Thorne could have his old B&B family back, he’d take them in a flash. Just because he’s moved on doesn’t mean he’s fully let go of the past. Thorne could begin to see that’s also the case for Katie.

Across town, Hope Spencer (Annika Noelle) will try to recover from her outburst. She’s an emotional wreck, so she’s lashing out at people who are just trying to help. Wyatt Spencer’s (Darin Brooks) visit was a sweet surprise and Sally Spectra’s (Courtney Hope) pop-in would’ve been fine without the puppy portion. Hope quickly decided Sally was trying to replace Beth Spencer with a dog.

Obviously, that’s not what Sally was aiming for. She’ll understand that Hope’s in a dark place, but she’ll want to somehow fix this if she can. The Bold and the Beautiful spoilers say Wyatt may pitch in on that. He might be able to settle Hope down and make her see that this was an innocent gesture. Perhaps apologies will be exchanged as Hope’s heart tries to heal.