The Bold and the Beautiful Spoilers: Friday, July 12 – Hope Tricked Into ASAP Wedding – Sneaky Sally Gets Rid of Flo 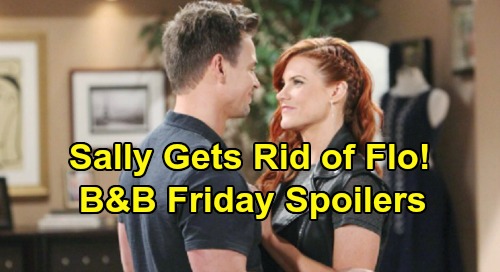 The Bold and the Beautiful (B&B) spoilers for Friday, July 12, tease that Thomas Forrester (Matthew Atkinson) will mess with his own son’s emotions. That seems like an awfully cruel thing to do considering Douglas Forrester (Henry Joseph Samiri) lost his mother not too long ago. However, Thomas will actually use that to his advantage as he sets up a dirty trick.

Thomas knows Douglas is Hope Logan’s (Annika Noelle) weakness, so he’ll continue to work this angle. He realizes Douglas is his best shot at moving up the wedding date. The Bold and the Beautiful spoilers state that Thomas will attempt to tug at Hope’s heartstrings. It’ll undoubtedly put Hope on the spot and leave her in a position where she just can’t say no.

Thomas may manipulate Douglas into believing they have to lock in their family’s future right away. He might suggest they wouldn’t want his new mommy to go away like his other one. If Thomas can spark some fear in the kid, that’d be a good way to rev up the pressure. Losing Caroline Spencer (Linsey Godfrey) was a tough blow for Douglas, so he certainly wouldn’t want to lose Hope.

Then again, Thomas may cause an incident where Douglas needs comfort. He might subtly point out that Hope can offer that comfort every night – after they’re married of course. By the time Thomas is through, he could have Douglas begging Hope to marry his dad immediately. Whatever the case, Hope will indeed be tricked into moving up the nuptials.

Meanwhile, Sally Spectra (Courtney Hope) will be stuck on Wyatt Spencer (Darin Brooks). After she walks in on Wyatt and Florence “Flo” Fulton (Katrina Bowden) making out at Forrester Creations, Sally will decide to get rid of Flo for a while. She’ll have a long list of errands for Flo to take care of ASAP.

The Bold and the Beautiful spoilers say Sally will hope the distraction pays off. She’ll want Flo out of sight and out of mind as she chats with Wyatt. B&B fans know Wyatt has fallen head over heels for Flo again, so it doesn’t look like Sally’s plan stands a chance of working.

In fact, Sally’s move could backfire if Wyatt catches on! It sounds like another exciting episode’s coming up. We’ll give you updates as other B&B news emerges. Stay tuned to the CBS soap and don’t forget to check CDL often for the latest Bold and the Beautiful spoilers, updates and news.