BY Heather Hughes on July 5, 2019 | Comments: one comment
Related : Soap Opera, Spoiler, Television, The Bold and the Beautiful 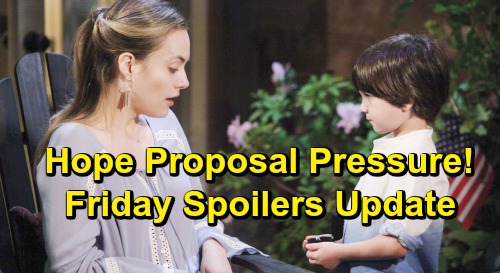 The Bold and the Beautiful (B&B) spoilers update for Friday, July 5, tease that Hope Logan (Annika Noelle) will be in a daze over Douglas Forrester’s (Henry Joseph Samiri) request. He just asked Hope to become his new mommy and marry his daddy, so Hope will have a hard time finding an answer. Hope obviously won’t want to break Douglas’ heart by telling him no. However, this is all happening way too fast.

Hope’s still trying to process the fact that Liam Spencer (Scott Clifton) is moving on with Steffy Forrester (Jacqueline MacInnes Wood). It’s what she wants on some level, but Hope still needs a chance to wrap her head around it. Instead of giving her breathing room and genuine support, Thomas is messing with his own child’s emotions and using him to influence Hope’s choices.

B&B spoilers say that manipulation will rev up even more soon. Now that Douglas has introduced the idea at his dad’s urging, Thomas can take it from here. It doesn’t look like Hope will agree to this proposal immediately, but Thomas will plan a proper one she can’t refuse. He’ll come up with a romantic way to pop the question next week, so Hope will finally relent and promise to be his bride.

Until then, Xander Avant (Adain Bradley) will stir up some trouble. The Bold and the Beautiful spoilers say Xander will remain extremely suspicious of Thomas. He feels like Thomas is out of control and most likely played a big role in Emma Barber’s (Nia Sioux) demise. Xander truly cared about Emma, so he just won’t be able to let this go. He’ll decide to get real answers, but he’ll need some assistance.

The Bold and the Beautiful spoilers state that Charlie Webber (Dick Christie) will pop up on Friday. Xander will wonder if Charlie would be willing to do him a favor. He may come up with some bogus excuse for the time being, but he’ll know his own goal. Xander will plan to find damning evidence against Thomas and hopefully prove he’s dangerous.

Will Charlie let Xander take a look at the security tapes? Will there be proof on those tapes of inconsistencies in Thomas’ story? The Bold and the Beautiful fans won’t want to miss the twists and turns ahead. We’ll give you updates as other B&B news comes in. Stay tuned to the CBS soap and don’t forget to check CDL often for the latest Bold and the Beautiful spoilers, updates and news.