BY hellodrdavis on June 20, 2019 | Comments: 2 comments
Related : Soap Opera, Spoiler, Television, The Bold and the Beautiful 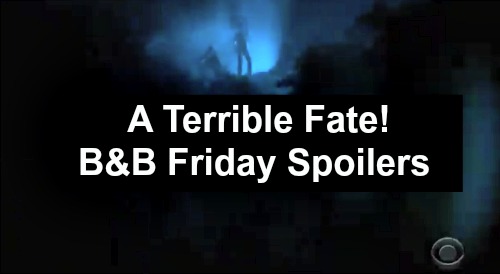 The Bold and the Beautiful spoilers for Friday, June 21, tease that Thomas Forrester’s (Matthew Atkinson) obsession with Hope Logan (Annika Noelle) will get totally out of control. As B&B viewers know, Thomas just pulled a distraught Emma Barber (Nia Sioux) into the office at Forrester Creations and confronted her about the Beth Spencer secret. And Emma’s threatening to run to Hope with the news that her daughter is alive.

That means that Thomas is going to have to act fast. He is bound and determined to make Hope his own and a mother to his son Douglas Forrester (Henry Joseph Samiri). He’s madly obsessed with getting what he wants, and he’s not going to let Emma or anyone else stand in his way.

What happens next remains to be seen, but since B&B spoilers say that someone is going to meet a terrible end, and since Thomas just threatened Emma, it looks like it’s going to be her who dies. B&B viewers will have to tune in on Friday’s episode to see exactly how this all transpires.

Meanwhile, on the new episode of B&B on Friday, June 21, Zoe Buckingham (Kiara Barnes) and Xander Avant (Adain Bradley) will wait and worry. They’re the ones who inadvertently spilled the beans about Beth to Emma, and they’ll expect that Emma is off finding Hope and/or Steffy Forrester (Jacqueline MacInnes Wood) and telling them the truth.

Of course, for Xander, the truth coming out would be a welcome relief. He’s wanted to tell the truth ever since he found out that Beth is alive, but Zoe and Thomas have prevented him from doing so. It looks like he and Zoe will argue once again about the costs and benefits of the truth coming out, and they’ll remain on opposite sides of the issue.

Other B&B spoilers say that Hope will take a walk down memory lane. She’s just visited with Steffy and Liam Spencer (Scott Clifton) at the cliff house and witnessed them as a happy family with Phoebe Forrester (River Davidson and Madeline Valdez) and Kelly Spencer (Zoe Pennington and Chloe Teperman).

In one way, the visit filled her heart with joy, since the children now have their father with them full time. But it will also make her miss Liam, and on Friday’s episode, Hope will reminisce about their life together. She may find that she misses Liam more than she thought.

Obsession turns deadly this week on #BoldandBeautiful, and someone’s going down. 💥 Don’t miss what happens! pic.twitter.com/mmGhbWkZIF