The Bold and the Beautiful Spoilers: Friday, June 28 – Thomas Panics During Hope’s Beth Meltdown – Wyatt Invites Flo To Move In

BY hellodrdavis on June 27, 2019 | Comments: one comment
Related : Soap Opera, Spoiler, Television, The Bold and the Beautiful 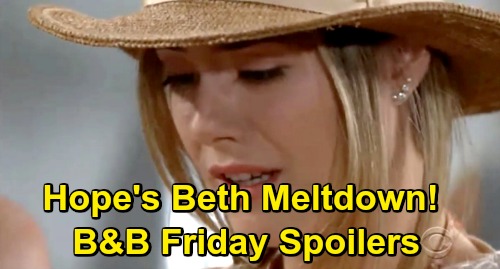 The Bold and the Beautiful spoilers for Friday, June 28, tease that Thomas Forrester (Matthew Atkinson) will not like what he’s witnessing. At a beach gathering at Steffy Forrester’s (Jacqueline MacInnes Wood) house, Hope Logan (Annika Noelle) just called Phoebe Forrester (River Davidson and Madeline Valdez) “Beth,” and it looks like a meltdown is about to ensue.

The scene will surely cause concern for everyone involved. Steffy and Liam Spencer (Scott Clifton) will worry about Hope’s state of mind and well-being as she becomes upset over her gaffe, and Hope will probably be embarrassed and concerned about herself.

For Thomas, the incident will cause instant panic and horror, because he’ll worry that Hope has suddenly figured out the truth – that Phoebe is indeed her daughter Beth Spencer. But since ongoing B&B spoilers indicate that the Beth secret will continue into the foreseeable future, it doesn’t look like the secret is going to come out now.

Rather, it looks like everyone will get past the uncomfortable moment as Hope realizes what she’s done and snaps back to reality. It also doesn’t look like this incident will deter Thomas from his devious goal during the get together – to drug Liam, hoping that the influence of the drugs will make Steffy and Liam get closer.

Next, on the new episode of B&B on Friday, June 28, Wyatt Spencer (Darin Brooks) will be feeling reflective. It seems that Emma Barber’s (Nia Sioux) death will get him thinking about the fleetingness of life and about how he wants to live life to the fullest. Emma was young, and he’ll start to feel like he shouldn’t wait to take an important step.

According to B&B spoilers, Wyatt will come to a huge life decision on Friday’s episode. It looks like he’ll decide to take his relationship with Florence “Flo” Fulton (Katrina Bowden) to the next level. The Bold and the Beautiful spoilers say that he and Flo will soon start living together, so he’ll likely take a big step and ask Flo to move in with him.

Of course, this would mean that Flo would have to move out of her luxurious digs at the Forrester Mansion, but she’ll probably jump at the chance to be with Wyatt on a more permanent basis. As B&B viewers know, she’s totally smitten with Wyatt, but she’s got the Beth secret weighing heavily on her mind.

Flo knows that Wyatt would dump her in a hot second if he found out about her involvement in Reese Buckingham’s (Wayne Brady) baby switch and adoption scam, so while she’ll be happy to move in with Wyatt, it might cause her some additional angst.