The Bold and the Beautiful Spoilers: Friday, June 7 – Xander Tries To Spill The Truth to Lope – Gets Stopped In His Tracks

BY hellodrdavis on June 6, 2019 | Comments: one comment
Related : Soap Opera, Spoiler, Television, The Bold and the Beautiful 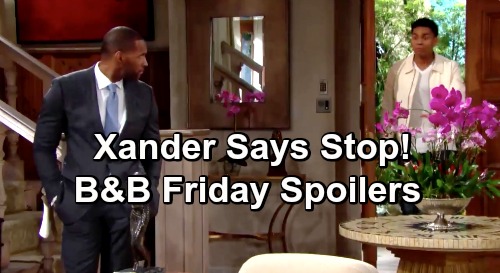 The Bold and the Beautiful spoilers for Friday, June 7, tease that Liam Spencer (Scott Clifton) and Hope Spencer (Annika Noelle) are in for a shock. They, along with Carter Walton (Lawrence Saint-Victor), were suddenly interrupted by Xander Avant (Adain Bradley) in the middle of their annulment-signing meeting. Xander rushed in the door and breathlessly told Hope and Liam that they couldn’t go forward with the annulment.

It was certainly a strange interruption, and Hope and Liam will want to know what’s up with Xander’s insistence that they stay married. As B&B viewers know, both Hope and Liam have received advice from numerous people about not giving up on their marriage, so they might just assume that Xander is yet another person who will tell them they’re making a mistake for all the familiar reasons.

But Xander’s got a different reason for bursting in on Hope and Liam. He is armed with information that, if he shares, will certainly keep Hope and Liam from going forward. He knows that Lope’s daughter Beth Spencer is alive and living as Phoebe Forrester (River Davidson and Madeline Valdez). But the big question now is whether he’ll actually go ahead and spill the truth in the moment.

As B&B viewers know, Xander strongly feels that the truth needs to come to light. Yet ongoing B&B spoilers indicate that the secret isn’t going to be revealed to Hope and Liam just yet, and that Hope and Liam will indeed follow through with the annulment. That means that either Xander is going to think better of divulging the truth, or something (or someone) is going to stop him.

We can’t forget that Thomas Forrester (Matthew Atkinson) is eavesdropping on the whole scene. He’s upstairs hiding in the wings, so he can make sure that Hope and Liam actually end their marriage. What’s he going to do in light of Xander’s outburst? He won’t like it that someone else has come along to try to prevent the annulment, so perhaps he’ll intervene to get rid of Xander.

And then there’s Zoe Buckingham (Kiara Barnes), who Xander left with Florence “Flo” Fulton (Katrina Bowden) at Forrester Creations. It’s always possible that Zoe followed Xander and/or figured out where he may have been going. We could see Zoe burst in and corral Xander, preventing him from revealing the truth about Beth.

At any rate, there’s going to be a scene, and something’s going to keep Xander from spilling the truth. We’ll have to wait until Friday’s episode to see exactly how it all plays out. How do you think Xander will be persuaded not to tell Hope and Liam the truth?