BY Heather Hughes on May 3, 2019 | Comments: one comment
Related : Soap Opera, Spoiler, Television, The Bold and the Beautiful 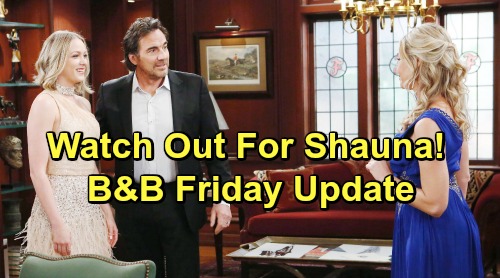 The Bold and the Beautiful (B&B) spoilers for Friday, May 3, tease that Thomas Forrester (Matthew Atkinson) will keep scheming. He’ll start by texting Steffy Forrester (Jacqueline MacInnes Wood) about sending some family photos. Thomas will specifically request some that include all four of them – Liam Spencer (Scott Clifton), Steffy, Kelly Spencer (Zoe Pennington and Chloe Teperman) and “Phoebe Forrester” (Isabella de Armas and Rosalind Aune).

Next, Thomas will urge Douglas Forrester (Henry Joseph Samiri) to do something special for Hope Spencer (Annika Noelle). He’ll suggest drawing a picture and approve when Douglas picks a heart. They’ll have a chat about Hope potentially being Douglas’ new mother. Thomas will hint that Douglas should suggest it to Hope again, so the poor kid is being used as a tool for manipulation.

Meanwhile, Florence “Flo” Fulton (Katrina Bowden) will announce a huge decision, but she’ll have an admission to make first. At Forrester Creations, Flo will insist that she can’t accept the position without sharing something. Naturally, Shauna Fulton (Denise Richards) will start to panic. She’ll scramble to stop Flo from spilling the baby swap secret, but that’s not what Flo has in mind.

The Bold and the Beautiful spoilers say Flo will fret about her lack of fashion experience. She won’t believe she’s got what it takes, but Ridge Forrester (Thorsten Kaye) will think that’s nonsense. Flo’s a Logan and Logans do well around FC. Plus, Ridge will feel confident that Flo’s a hard worker. He’ll let her know she’s welcome there and will most definitely succeed.

Once Flo’s convinced, she’ll formally accept the job. It won’t be long until Shauna notes that it’s Flo’s birthday. The others will think this calls for a celebration, but Flo will give it a hard pass. She won’t want anybody making a big fuss, so they’ll go about their business.

After Hope takes off to be with Douglas, Brooke Forrester (Katherine Kelly Lang) will worry about him. She’ll wonder how you replace a child’s mother, so Flo will seem uneasy. Over with Shauna, she’ll do her best to get chummy with Ridge. They’ll discuss his new designs, including one that Shauna finds particularly gorgeous.

Later, Shauna will surprise Flo by wearing this Forrester original. She’ll gush about it along with the handsome man who created it. Shauna clearly has her eye on Ridge, so Brooke may want to watch out! As for Flo, she’ll let herself get excited about the possibilities this job could bring.

Back with Thomas, he’ll once again push Steffy to send those pictures. Thomas will fib that Douglas is dying to see his cousins and count on his sis to come through for him. When Hope arrives, Thomas will be right out of the shower. He’ll approach Hope in a towel and admit Douglas has gone to the park with Maya Avant (Karla Mosley) and Lizzie.

B&B spoilers state that Hope will notice the drawing from Douglas, so she’ll be touched. After Steffy grants Thomas’ earlier request, his phone will ding. Thomas will show Hope a photo of Liam, Steffy and the girls – a picture-perfect family if you’ve ever seen one. He’ll contend that this pic shows where Liam should be and Douglas’ drawings say it all for Hope.

Hope won’t understand, so Thomas will give a passionate speech about how they can heal together. He’ll gently pull Hope toward him and contend that there’s life after Liam. Hope can let Liam go and be with him instead. The Bold and the Beautiful spoilers say Thomas will kiss Hope, so she’ll shove him off and look at him like he’s absolutely insane.

It sounds like another hot episode’s coming up. We’ll give you updates as other B&B news emerges. Stay tuned to the CBS soap and don’t forget to check CDL often for the latest Bold and the Beautiful spoilers, updates, and news.