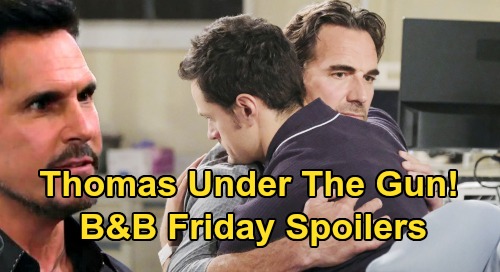 The Bold and the Beautiful spoilers for Friday, September 6, tease that Ridge Forrester (Thorsten Kaye) will get an earful. As B&B viewers know, he’s just asked his son Thomas Forrester (Matthew Atkinson) to recount exactly what happened on the night of Emma Barber’s (Nia Sioux) fatal car accident. This is a big step for Ridge, who has been avoiding the issue for days now, and he’ll brace himself as Thomas begins to spill all the harrowing details of that night.

Of course, from everything that B&B viewers have seen regarding Emma’s accident on Mulholland Drive, it certainly appears that Thomas heavily contributed to her death. Although Emma was distracted due to her texting, she was also distracted due to the fact that Thomas was chasing her, and he may have been trying to run her off the road. Worse, Thomas stopped at the crash site, but he didn’t offer Emma any assistance and fled the scene.

On Friday’s episode of B&B, it appears that Thomas will tell his father everything that happened on the night of Emma’s accident. He’ll probably start with his fierce argument with her at Forrester Creations, during which he threatened and grabbed her forcefully. It was about then that Pam Douglas (Alley Mills) came into the room and Emma broke free from Thomas and left for Hope Logan’s (Annika Noelle) cabin. Thomas then followed her onto Mulholland Drive, where the accident occurred.

According to B&B spoilers, Ridge won’t be happy about what he hears from his son, which indicates that Thomas is going to tell him the whole truth about what happened. Ridge will be horrified, as he’ll know that Thomas could be held legally responsible for Emma’s death. He’ll probably want to fix things for his son, but this will be a situation that will be nearly impossible for him to fix, since he knows that Detective Alex Sanchez (Jeremy Ray Valdez) is on the case.

A lot will be swirling around Ridge’s mind. He’ll be simultaneously angry with Thomas for what he did and scared for his future. According to B&B spoilers, he’ll lash out at his son, most likely outraged that Thomas would threaten such a sweet girl like Emma and put her in a dangerous situation where an accident could occur. But ultimately he’ll have to make a decision about how to protect Thomas from likely prosecution, and he’ll probably start by getting Thomas some legal representation.

Meanwhile, on the new episode of B&B on Friday, September 6, Bill Spencer (Don Diamont) will follow through on a promise. Bill promised both Brooke Forrester (Katherine Kelly Lang) and Thomas that he’d find a way to make Thomas pay for what he’s done, and on Friday’s episode Bill will take action.

According to B&B spoilers, Bill will go on a search to find cold, hard evidence against Thomas, and that leads us to wonder whether he’ll decide to take a look at the GPS in Thomas’ car. Previously, Xander Avant (Adain Bradley) checked Thomas’ GPS and saw that Thomas had followed Emma and stopped at the crash site. Bill just might go snooping around Thomas’ car and uncover something that he’ll turn over to Detective Sanchez.

We’ll see what happens there, but we also expect to see Ridge do everything he can to protect Thomas from any possible charges in connection with Emma’s death. As Thomas recounts what happened on the night of Emma’s death, Ridge will probably realize pretty quickly that Thomas’ GPS will be a key factor, so he might go looking for it as well. We could see Bill and Ridge both going after the same evidence, but for very different reasons!