The Bold and the Beautiful Spoilers: Hope Blasts Steffy Over Adoption – Insists Rival’s Trying to Replace Beth in Kelly’s Life 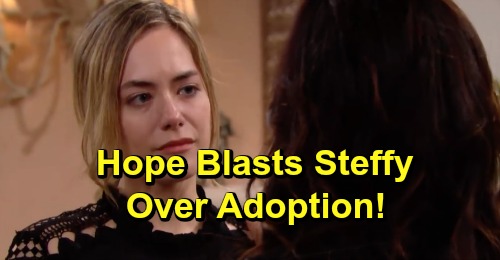 The Bold and the Beautiful (B&B) spoilers tease that Steffy Forrester (Jacqueline MacInnes Wood) will feel horrible about what Liam Spencer (Scott Clifton) and Hope Spencer (Annika Noelle) are going through. She’ll get updates on their “dead” baby and want to know what she can possibly do to help. Unfortunately, Hope and Liam mostly just need time to grieve. Not much else can be done right now.

Steffy will hate that she caused Liam’s delay by contacting him about Kelly Spencer’s (Zoe Pennington) fever. She’ll think Liam should’ve at least been there for Hope when she was so terrified. Steffy will feel like she should’ve just handled Kelly’s minor sickness on her own and let Liam go ahead with his plans.

Of course, Ridge Forrester (Thorsten Kaye) and Dr. Taylor Hayes (Hunter Tylo) will try to shut down Steffy’s guilt. They’ll insist that this isn’t their daughter’s fault or anyone else’s. Sometimes bad things happen to good people and that’s just the way life is. However, this isn’t really one of those times.

B&B fans can tell that Dr. Reese Buckingham (Wayne Brady) has been scheming. It’s obvious that Beth Spencer isn’t really dead, so it seems she’ll be sold at some point. It’s the only thing that makes sense considering broke and pressured Reese’s current situation.

Meanwhile, Steffy will miss her twin more and more next week. She’ll wish Phoebe Forrester were still around and that’ll renew her mission to give Kelly a sister. That could easily destroy the peace Steffy and Hope establish at the memorial service. Steffy will insist that she’s going to help Hope through this, but taunting her by adopting another baby doesn’t seem like the way to do that.

Once Steffy moves forward with the adoption idea and this becomes real, how will Hope react? She’ll undoubtedly cycle through several stages of grief in the coming episodes. The adoption news could really rev up the anger angle. Since Steffy originally wanted Kelly and Beth to be close, Hope may feel like Steffy’s trying to replace her daughter. She could lash out in a big way and reignite their war.

The Bold and the Beautiful spoilers say this could cause a rift between Liam and Hope as well. He may side with his ex and suggest that “Lope’s” problems shouldn’t become Steffy’s problems. If Steffy wants to adopt another kid, that’s her choice. It’s a cruel one at the moment, but it’s her choice nonetheless.