The Bold and the Beautiful Spoilers: Hope Faces Haunting Reminder of Beth’s Death – Tells Thomas a Secret During Power Failure 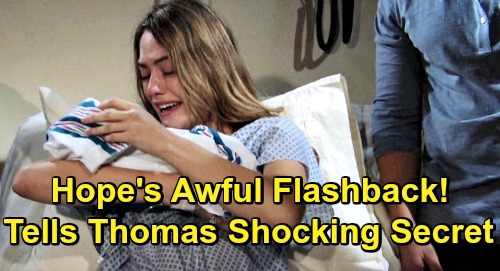 The Bold and the Beautiful (B&B) spoilers tease that Hope Spencer (Annika Noelle) will face a flood of emotions. She’ll be going about her day as usual when she’s suddenly plunged into darkness. A mechanical failure at Forrester Creations will shut off all the lights, so Hope will have to deal with some tough memories.

B&B viewers can expect an emotional nightmare for poor Hope. She’ll flash to that horrible night on Catalina Island when things were so dark and eerie. The power situation will serve as a haunting reminder of the pain Hope endured. She’ll start to cry as she reflects on losing Beth Spencer and the sting of grief that just won’t go away.

Later, Hope will share some intense moments with Thomas in the boardroom. This ordeal with the lights will really stir up some difficulties for her. Hope will decide to open up to Thomas a bit, which he should love. As Hope begins to feel more and more comfortable around him, Thomas can inch closer to his ultimate goal of reuniting with her.

The Bold and the Beautiful spoilers say Hope will talk about Steffy Forrester (Jacqueline MacInnes Wood), who’s currently in Paris with Liam Spencer (Scott Clifton) and the girls. Despite the feuding they’ve done in the past, Hope will admit she misses Steffy. She’ll also ask if she can tell Thomas a secret.

Hope will assure Thomas that she misses Liam and Kelly Spencer (Zoe Pennington and Chloe Teperman) as well, but it’s “Phoebe Forrester” (Isabella de Armas and Rosalind Aune) she misses most of all.

She always felt so deeply connected to “Phoebe,” and she’ll think it all makes sense now. Hope will believe it’s because they’re related, but she won’t realize just how related they are!

Of course, Florence “Flo” Fulton (Katrina Bowden) has been posing as “Phoebe’s” birth mother. Since Flo was recently confirmed as a Logan, Hope will think she simply feels close to her cousin’s little girl. B&B fans know “Phoebe” is actually Hope’s own daughter, so that’ll keep driving the drama.