The Bold and the Beautiful Spoilers: Hope Lies To Douglas For Joint Custody – Promises Thomas She’ll Get Back Together

BY hellodrdavis on October 28, 2019 | Comments: 3 comments
Related : Soap Opera, Spoiler, Television, The Bold and the Beautiful 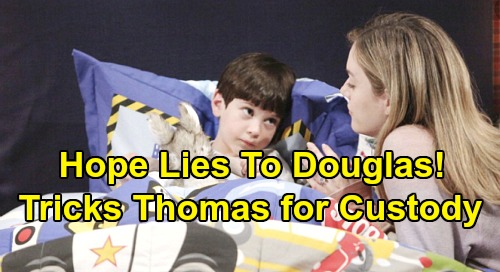 The Bold and the Beautiful spoilers tease that Hope Logan (Annika Noelle) will soon be put on the spot. As B&B viewers know, she was devastated when Thomas Forrester (Matthew Atkinson) and Ridge Forrester (Thorsten Kaye) came and whisked Douglas Forrester (Henry Joseph Samiri) away from the mansion. She has come to view Douglas as her son, and now she’s going to be determined to do whatever she can to get custody of him from Thomas.

But that could be easier said than done. Thomas has made it abundantly clear that he’s not going to just relinquish his parental rights and fork over full custody of Douglas to Hope and Liam Spencer (Scott Clifton). And there’s just not much that Hope can do about that, short of trying to prove that Thomas is an unfit father, which would be exceedingly difficult to do at this point.

Well, according to B&B spoilers, Hope will launch another strategy. She’ll try to cajole Thomas into giving her joint custody of Douglas, so she can have some say in Douglas’ upbringing and give him what she considers to be a stable home at least part of the time with her, Liam, and Beth Spencer (River Davidson and Madeline Valdez). But to do that, she’ll need Thomas to sign off on it, and that’s where things will get tricky.

But Hope will have a plan in place. She’ll decide that she’s going to try to use Thomas’ lingering feelings for her to try to get him to sign off on her having joint custody. She’ll seek to manipulate Thomas into believing that the two of them might have a future together. The only problem with all of this is that it looks like Thomas may be onto her plan and he’ll manipulate her right back.

According to The Bold and the Beautiful spoilers, Hope will find herself in a real bind when she’s in the process of manipulating Thomas. An unforeseen complication will arise when Douglas becomes involved in a discussion between Hope and Thomas, and Hope must continue her ruse of promising a possible future for them. It looks like both Douglas and Thomas will question Hope about what’s going to happen between the three of them in the future, and Hope will be forced to give them false hope.

Of course, this means that Hope will be lying to Douglas and giving him an untrue expectation about the three of them being a family together in the future. She’ll probably feel terrible about this, but there won’t be much she can do about it – it will be an unfortunate aspect of her plan to manipulate Thomas. And there’s a good chance that Thomas will know exactly what she’s up to.

Ongoing B&B spoilers say that Thomas will realize that Hope is trying to use his feelings for her against him, and that he’ll ultimately tell Hope that he’ll give her joint custody of Douglas if she meets his terms. It’s looking very much like those terms will involve sleeping with him, and that if Hope agrees to one night with him, then he’ll give her what she wants. We’ll see what ultimately happens, but it’s all looking like Hope’s big scheme may backfire on her.

At any rate, the sad thing here is that it looks like Douglas may be given false hope about his dad and Hope getting back together. And that’s bound to be confusing for him, since he’s spent so much time recently with Hope and Liam in the cabin. Do you think Douglas will wind up totally confused by the adults in his life? Stay tuned to the CBS soap and don’t forget to check CDL often for the latest Bold and the Beautiful spoilers, updates, and news.