The Bold and the Beautiful Spoilers: Hope Loses Liam After Thomas Plot Blows Up – Self-Sabotage Gives Steffy the Upper Hand 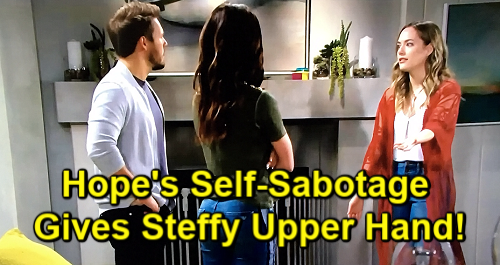 The Bold and the Beautiful (B&B) spoilers tease that Hope Logan (Annika Noelle) is setting herself up for major trouble. She’s determined to protect Douglas Forrester (Henry Joseph Samiri), but she could be doing it at the expense of her own safety. Thomas Forrester (Matthew Atkinson) became a menace due to his obsession with Hope, so fueling that obsession probably isn’t the best plan!

Nevertheless, that’s exactly what Hope’s doing and will continue to do. The Bold and the Beautiful spoilers say Hope could be in over her head here. Since she’s so committed to her ill-advised plan, she’ll make far too many risky choices.

Hope will let Thomas believe there’s still a shot for them as a couple. She’ll also keep Liam Spencer (Scott Clifton) in the dark on what she’s up to, which is a bad idea for several reasons.

For starters, Liam can’t step up to protect Hope if he doesn’t know what’s going on. Thomas can get nasty when things don’t go his way. If Hope loses control of her scheme – and B&B spoilers say she will – Liam may not be able to be the rescue ranger as usual. Of course, secrets in general aren’t a good idea in a relationship. Liam’s not going to like it when he realizes what’s been going on behind his back.

That’s especially true when Steffy Forrester (Jacqueline MacInnes Wood) will be showing Liam honest vulnerability. She’s already made some confessions to Liam lately and more are on the way. They’ll be connecting on a deep level while Hope feels increasingly distant. Hope will feel like she’s making a temporary sacrifice for Douglas’ sake, but this could be a far bigger blunder than she realizes.

The Bold and the Beautiful spoilers say Hope will land in peril before all this is over – and she won’t be the only person in jeopardy. At least one other character could be in real trouble as this plot spirals out of control.

Unfortunately, that may not be the extent of Hope’s consequences. She could easily sabotage her own romance, particularly if she keeps her end of the bargain following Thomas’ indecent proposal.

None of his is adding up to “Lope” sticking together! Hope may be poised to get dumped, so Steffy can probably slide right in and reclaim Liam if she wants. The Bold and the Beautiful spoilers say some hot drama’s ahead, so don’t miss all the action.