The Bold and the Beautiful Spoilers: Hope Resents Steffy’s Adoption – Fears New Baby Will Draw Liam Back To Steam

BY Kinsley Goldman on January 25, 2019 | Comments: one comment
Related : Soap Opera, Spoiler, Television, The Bold and the Beautiful 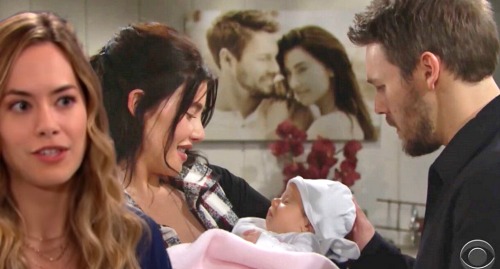 The Bold and the Beautiful (B&B) spoilers tease that Liam Spencer (Scott Clifton) will open up about his pain. He knows Hope Spencer (Annika Noelle) had a connection with their daughter that he can’t even begin to understand. Beth Spencer grew inside Hope, so she can’t shake such a deep bond. It’s been tough for Hope to let Beth go, so Liam’s been doing his best to stay strong for her.

However, Liam will let himself crumble during an upcoming conversation with Wyatt Spencer (Darin Brooks). B&B spoilers say Wyatt will want to be there for his brother. He’ll assure Liam that it’s OK to struggle, too. Liam doesn’t have to show so much strength all the time, especially when he’s talking to someone besides Hope. Wyatt will encourage Liam to confide in him and cry on his shoulder a bit.

Liam will indeed drop those walls and explain how he’s feeling. He should feel better once he shares everything with Wyatt. The Bold and the Beautiful spoilers say Liam will talk about the constant sorrow. He knows it won’t be like this forever, but it’s hard to see the light at the end of the tunnel.

Liam will add that Steffy Forrester’s (Jacqueline MacInnes Wood) plans could complicate things even more. He’ll bring Wyatt in the loop on Steffy’s adoption goal, but he’ll want his bro to keep it under wraps. Liam won’t think it’s wise to pile anything else on Hope right now. Just trying to get through each day is hard enough.

Wyatt won’t think it’s wise to keep secrets, which is probably good advice since we all know Hope will find out anyway. It won’t take Hope long to realize something’s up. The Bold and the Beautiful spoilers say Steffy’s motives will be questioned during the week of January 28-Febuary 1. Hope will be determined to get some answers, so expect some serious drama.

It sounds like this is building to an intense confrontation. Hope may corner Steffy with her new baby and accuse her of trying to rub her own loss in her face. She may even act like Steffy’s trying to steal Liam back with the promise of another daughter.

Hope’s grief is clouding her view these days, so she won’t be behaving rationally. Steffy should understand that, but she still may feel the need to defend herself. Since Steffy’s most likely adopting Beth Spencer and neither one of them knows it, there should be much more conflict to come.

Are you excited about the next phase of this B&B storyline? We’ll give you updates as other news comes in. Stick with the CBS soap and don’t forget to check CDL often for the latest Bold and the Beautiful spoilers, updates, and news.